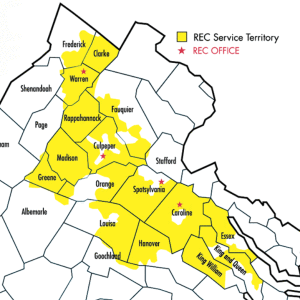 More than one in six Virginia residents gets electricity from a rural electric cooperative rather than a big investor-owned utility like Dominion Energy or Appalachian Power. Co-ops don’t get much attention from clean energy advocates and the press, but that might be a mistake. Co-op members aren’t just customers; they’re owners.

In theory, that should put co-ops at the head of the energy transition.

The current reality is mostly quite different, both in Virginia and nationwide. While a few co-ops have adopted innovative customer-friendly programs, most actively resist change. Here in Virginia, a battle over reform of the Rappahannock Electric Cooperative (REC) shows how difficult it is for co-op members to make their voices heard.

According to the reform group Repower REC, the co-op’s management not only refuses to make changes that would save members money, it actively cuts members out of the decision-making process. Repower REC is endorsing a slate of reform board candidates and proposing amendments to the co-op’s bylaws that would give members the right to fair elections and to obtain basic information about REC’s management and finances.

The lack of transparency and democracy at REC turns out to be a common failing of co-ops. A 2016 report from the Institute for Self-Reliance described three reasons why co-ops are laggards rather than leaders in the energy transition: overreliance on coal, long-term contracts with suppliers and a failure of democracy in governance.

Coal accounts for 75% of energy generated by electric cooperatives nationwide, compared to less than 28% today for all utilities nationally. Worse, failing to see the promise of distributed generation, most co-ops have locked themselves into long-term supply contracts that give them little room for self-generation with solar and wind. Having tied their members to fossil fuels, it’s not surprising that co-op managers don’t want their governance scrutinized too closely.

In fact, stuck with the dirty black stuff, rural electric cooperatives are much more likely than investor-owned utilities to support coal and oppose climate regulations. This may even help explain why rural voters are so much more likely than urban voters to support coal even in non-coal states, and to doubt climate science. Certainly their co-ops, which are supposed to educate consumers about the electric power industry, are not helping to educate them about the realities of climate science.

But according to the Institute’s report, it’s the third reason that holds co-ops back the most. Co-op member-owners have the right to vote but mostly don’t, often because they’re presented with no real choices, and lack basic information needed to cast an informed vote.

A host of other barriers, such as a lack of transparency, and the practice of collecting blank “proxy ballots” that incumbent board members complete as they see fit, ensures the reelection of entrenched board members and their hand-picked successors. Board members pay themselves handsomely for very part-time work, with many staying on boards for decades if not life.

All of these problems are present at REC, according to Repower REC. Seth Heald, a Repower REC founder who’s been an REC member for over a decade, says “the total lack of transparency surrounding the co-op’s board meetings seems designed to keep REC members from knowing whether their board members are well-informed, engaged and advocating for consumers. It also prevents us from learning the extent to which management may exercise control over compliant board members.”

To be fair, other Virginia co-ops show the promise of the member-owned model. The only community solar programs offered in Virginia today are run by coops: BARC in southwest Virginia and Central Virginia Electric Cooperative in the Charlottesville area. BARC also installed solar on all three Bath County schools, putting it way ahead of larger and richer jurisdictions like Fairfax and Loudoun that get power from Dominion.

Virginia co-ops also reached a deal with the solar industry this year designed to ease some of the barriers to rooftop solar, a deal neither Dominion nor APCo would agree to.

But Virginia co-ops haven’t adopted the kinds of aggressive energy efficiency programs that have lowered energy demand and saved money for members of the nation’s most innovative co-ops, such as Roanoke Electric Cooperative in North Carolina and Ouachita Electric Cooperative in Arkansas. In both places, utility financing of efficiency improvements and federal grants from the Department of Agriculture have allowed even very low-income members to pay for insulation and appliance upgrades while simultaneously lowering electric bills.

It’s hard to believe more co-ops wouldn’t offer programs like these if they truly had their members’ interests at heart.

REC members will be voting this month on board candidates and Repower REC’s proposed bylaw amendments, using proxy/ballot forms attached to the cover of the July Cooperative Living magazine. Forms must be mailed back in time to arrive by Aug. 19. Members may also vote through REC’s SmartHub online tool by Aug. 19, or in person at the August 22 annual meeting.