See below for Virginia Republicans’ reaction to yesterday’s protest by Del. Ibraheem Samirah of Racist-in-Chief Donald Trump’s speech at the Jamestown commemoration. Classy as always, Virginia Senate Majority Leader Tommy Norment (R) – who edited a yearbook “filled with racist photos and slurs” and who the Washington Post editorial page correctly called out for his corrupt “ethical vacuum” – tweeted that Samirah is supposedly an “ill advised little bastard.” Nice, eh?

As for House Speaker Kirk Cox (R), he didn’t use foul language, like his Senate Republican counterpart, but the language Cox did use was at best wildly hypocritical. I mean, seriously? Cox is going to call out Samirah’s protest for being “disrespectful” to Trump and being “inconsistent with common decency,” but Cox is NOT going to call out Trump for his uncounted instances of racist, xenophobic, misogynistic, vicious, abusive, ignorant, etc. language? And, of course, Cox is NOT going to call out Trump for his ACTIONS against democracy, the rule of law, immigrant families (kids in cages, anyone?), immigrants from Muslim countries, science, the environment, working people, communities of color, the constitution, democracy, decency, etc? Nope. On all those fronts, it’s dead silence (or worse, as the chants of “Trump! Trump! Trump” by Republicans at the Jamestown event yesterday exemplified) from Cox, Norment et al. 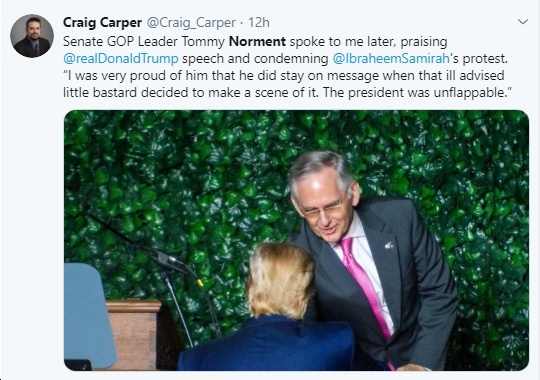 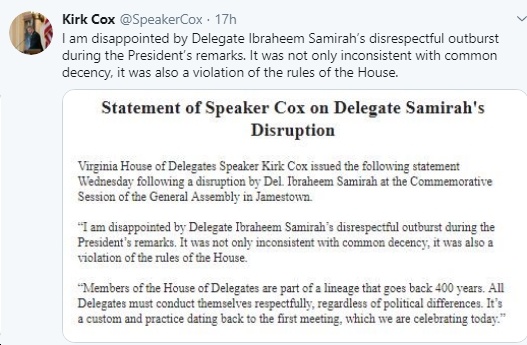 Video: Sen. Tim Kaine Says There HAVE TO Be Consequences for Trump Being “willing to countenance and encourage violence to overturn an election and...