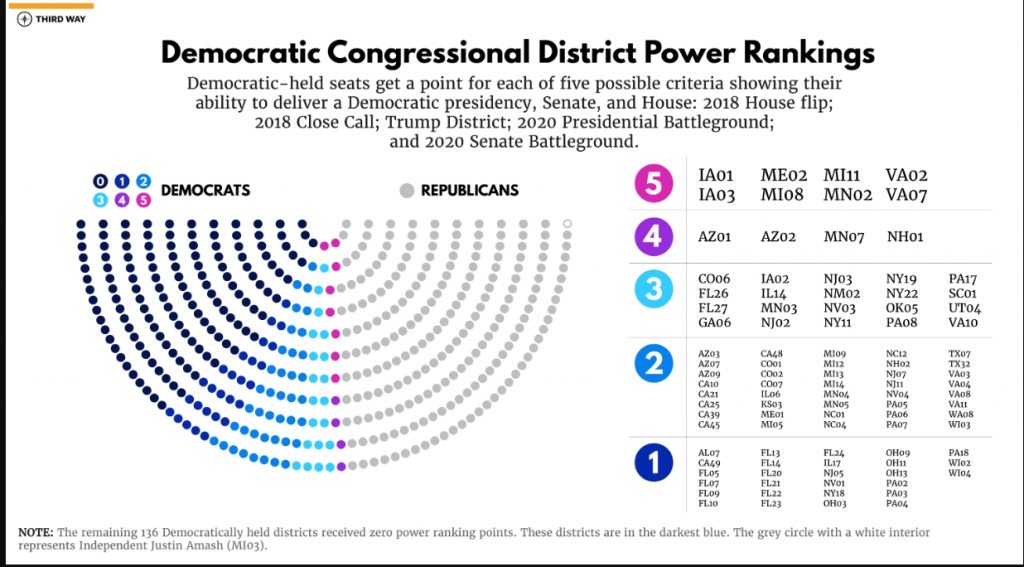 I’m not a big fan of “Third Way,” for numerous reasons including that it’s a “corporate-funded centrist group” that reportedly has received secret funding from the Koch brothers. Ick. Despite that, I found its new report – The 99 House Districts That Will Determine Dems’ Fate – by David de la Fuente (an alum of NARAL and the DSCC; also on the advisory board of High School Democrats) to be interesting. We’ll get to the part about Virginia in a second, but first, here are some highlights from the report.

So what about Virginia? As you can see, every single Democratic-held U.S. House of Representatives seat from Virginia (VA02, VA03, VA04, VA07, VA08, VA10, VA11) – 7 total out of 11 U.S. House seats from Virginia, including every seat currently held by a Democrat – is included in the “99 House Districts That Will Determine Dems’ Fate” list. Here’s a brief recap as to why that’s the case.

I think this is a reasonable way of looking at things; how about you? I’d also note that there are districts not included in the 99 that I think are potentially winnable, such as VA05 and maybe even VA01 – both currently held by Republicans (Denver Riggleman in VA05 and Rob Wittman in VA01). But overall, I agree that it’s going to be crucial to hold VA02 and VA07, while cranking up turnout in the “blue” districts.

Finally, I’d note that the “Third Way” report doesn’t get into gubernatorial, state legislative and other “down-ballot” races, but that these are also VERY important – both in their own right, and also with regard to the 2020 presidential and Congressional races. Here in Virginia, of course, we are on an odd-year cycle for legislative and gubernatorial elections (the next big one, for the entire state legislature, is of course on November 5 – just a few weeks from today), but in other states it will really matter next year…