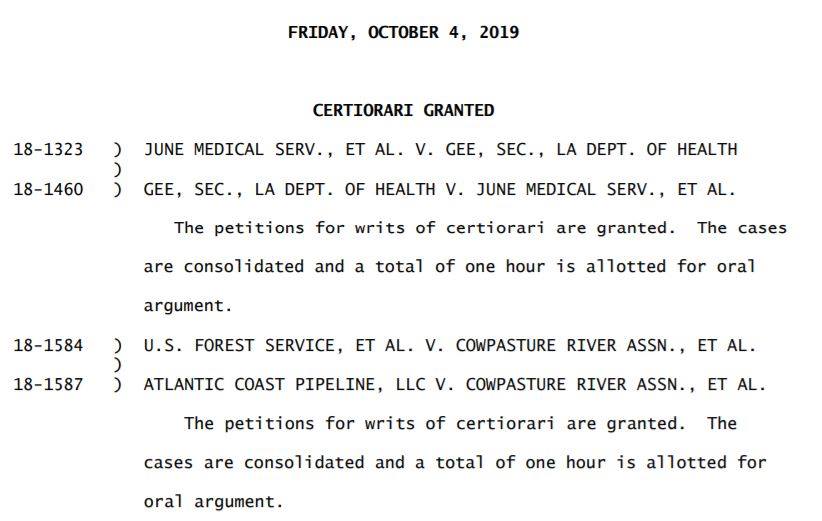 This morning, the United States Supreme Court agreed (granted “cert” – click on image to enlarge) to hear the Atlantic Coast Pipeline (ACP)’s challenge to a ruling by the Fourth U.S. Circuit Court of Appeals, prohibiting the ACP from crossing the Appalachian Trail on federal land managed by the U.S. Forest Service.

Never mind that the Forest Service has never granted such a permit, because federal law clearly prohibits it from doing so.

Never mind that, as the Southern Environmental Law Center pointed out in its briefs the Fourth Circuit decision was based on four different grounds and thus any decision by the Supreme Court would not have any practical effect on whether the pipeline gets built on its preferred route.  That means that a Supreme Court decision would be no more than an “advisory opinion,” which federal courts are prohibited from issuing.  So much for the myth of “judicial restraint”.

The Trump administration placed its thumb firmly on the side of Dominion Energy and Duke Energy, the prime sponsors of this $8 billion “reckless, racist ripoff.”  Attorney General William Barr urged the Court to take the case, refusing to recuse himself – despite the fact that he served, until recently, on Dominion’s board and has received millions in cash and stock awards from the company.

This is part of an unprecedented strong arm job by Dominion and Duke, which have spent an incredible $109 million lobbying for the ACP.

But the fight over the Appalachian Trail is not over yet.  Today’s action is just a decision to hear the case, not a decision on the merits, which likely will not be made until next spring.  Dominion will spin this as a great victory, but, while disappointing, it is just another turn in the road.

Dominion has lost at least seven permits thus far for the ACP, and more court decisions are in the works. For now, we know two things.  One, it’s game on.  And two, this pipeline will never be built.