Thanks to Activate Virginia for the “heads up” on this new report, by Majority Action (“a non-profit, non-partisan organization that empowers shareholders to hold corporations accountable to high standards of corporate governance, social responsibility, and long-term value creation”), posted earlier this month at the Harvard Law School Forum on Corporate Governance and Financial Regulation, entitled “Climate in the Boardroom.”

The key points of the report relate to BlackRock and Vanguard, the “world’s largest asset managers control the largest blocks of shares in nearly every publicly traded firm in the U.S.,” and how “BlackRock and Vanguard’s holdings are so significant that at least 16 of these critical climate votes would have received majority support if both of these asset managers had voted in favor of them.”

So how does this relate to Virginia, you ask? Simple: because one of the “28 companies with critical climate resolutions” noted in this report was none other than our old friends at Dominion Energy. Check out the following two paragraphs, bolding added by me for emphasis.

At Dominion Energy, shareholders proposed an independent chair policy to provide additional oversight. As a major electric utility, Dominion’s long-term success depends on its ability to undertake the rapid transformation necessary to meet the challenges and risks posed by climate change. Dominion’s current decarbonization targets fall short of what is required, largely because it continues to invest heavily in gas generation assets, many of which risk early closure and costly writedowns. In pursuing these investments in gas, the company has also generated significant public backlash, in particular to decisions related to its Atlantic Coast Pipeline (ACP).

The delays and legal challenges faced by the project mean that it now faces substantially different economic conditions than when it was approved, calling into question whether it will ever be completed, and if so, whether regulators will agree to allow the utility to recoup the costs of the investment from consumers. At the same time, Dominion’s lead independent director has longstanding ties to the pipeline project, raising questions as to whether he can act as an effective representative of shareholders as lead independent director. The resolution received substantial shareholder support, with 39.4% voting in favor. Combined, BlackRock and Vanguard hold 12.4% of Dominion’s stock, and had they supported the resolution, it would have achieved majority support.

So basically, as Jon Sokolow puts it, “39% of @DominionEnergy  shareholders see the climate and social justice handwriting on the wall and are demanding action,” yet the resolution didn’t pass, in part because of opposition by BlackRock and Vanguard. Jon also links us to the independent chair resolution filing, which contains some fascinating information about Dominion’s board. For instance:

Perhaps, since Dominion’s a state-regulated (at least in theory) monopoly, if and when Democrats take back the General Assembly, they might take a look into Dominion’s corporate governance and how the climate crisis is being dealt with – or more to the point, NOT dealt with – in the Dominion boardroom? 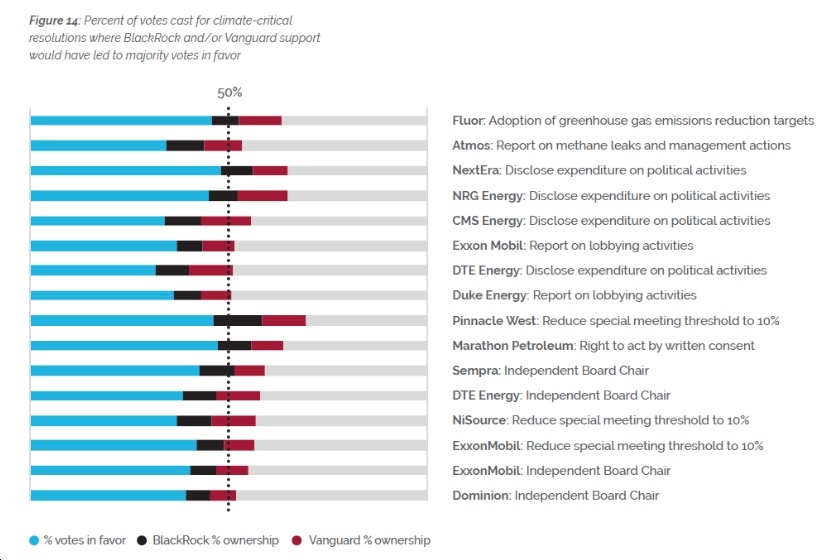