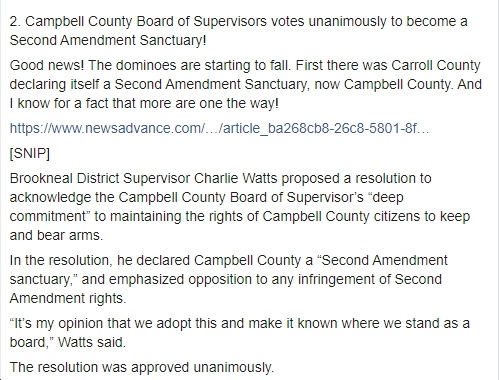 How are pro-gun folks reacting to the Democratic sweep in Virginia Tuesday night? From the looks of the following post from the “Virginia Citizens Defense League” (VCDL), they’re none too pleased, threatening: a) to use “use state and federal courts, including the Virginia and U.S. Supreme Courts” to “block unconstitutional laws and possibly provide an injunction against such a law taking effect until a final ruling has been made” and b) to “push for more Second Amendment Sanctuary Localities, like Carroll County, which will refuse to enforce unconstitutional gun laws.” It’s certainly going to be interesting to see how this plays out, given that Virginia Democrats are all but certain to pass a wide array of gun violence prevention legislation – universal background checks, “red flag laws,” etc. – in the 2020 Virginia General Assembly session, and that Gov. Northam is also all but certain to sign those bills into law. Stay tuned…

Of the four possible results, yesterday’s elections provided the worst scenario for gun owners in Virginia and one that VCDL has been warning about for almost a year.

Starting in early January, the state will be completely under Democrat control for the next two years: House, Senate, Governor, Lt. Governor, and Attorney General.

While this election was supposed to be a referendum on gun control, it appears to have had much more to do with recent court redistricting, which turned six Republican districts into blue-leaning districts. Chris Jones, Dave Yancey, and Rocky Holcomb lost their redistricted seats. Chris Stolle lost his race by 18 votes! A reminder that every vote counts. However, there will be a recount in Stolle’s race and things could change with such a small margin.

Strong pro-gun legislators across the state won their elections, including some in tightly contested fights, such as Amanda Chase’s race for her Senate seat, Nick Freitas (as a write-in nonetheless!), Dave LaRock, Emily Bewer, and Margaret Ransome. All won handily. Speaker Kirk Cox, who had been redistricted into a much, much harder district for a Republican to win, still managed to beat down his opponent!
The same for Barry Knight.

Tim Hugo lost with his opponent getting obscene amounts of cash from out of state donors, including over $600,000 from Michael Bloomberg.

Republican Senator Glen Sturtevant, who lost, voted to support a Red Flag Law bill earlier this year, weakening his base.

Anti-gun Rosilyn Tyler almost lost her seat. Her bad voting record on guns, especially if gun control gets passed in the upcoming General Assembly session, could well catch up to her.

The Road Ahead – Playing the Hand We Were Dealt

While gun control wasn’t the driving force for voters that the gun controllers hoped for, they will still use the election results and their huge debt to Bloomberg and Soros to push their gun-control agenda. Senator Dick Saslaw said as much yesterday, as he promised movement on gun control to Moms Demand Action and Everytown.

While we don’t have a firewall to stop bad gun bills from becoming law, we are not helpless.

The right to keep and bear arms is an enumerated and protected right, under both the Second Amendment to the U.S. Constitution, but also under Article 1, Section 13 of the Virginia Constitution. That leads to the next item:

The Courts can be used to block unconstitutional laws and possibly provide an injunction against such a law taking effect until a final ruling has been made. We can use state and federal courts, including the Virginia and U.S. Supreme Courts.

Moderate Democrats might not go along with some of the more extreme gun-control schemes. Those of you in their districts need to keep the pressure on them.

VCDL will continue to be on the offensive, pushing to restore the gun rights that have been stripped away from us over the years.

A stronger VCDL. Our membership is up 25% since last year (we have over 8,000 members and 30,000 subscribers to VA-ALERT). That’s a good start, but we need to have as many members as we possibly can get (there are over 650,000 CHP holders in this state, not to mention hunters and target shooters). Encourage your friends, family, and co-workers to join us!

Gun owners being more active and visible. Write letters to the editor. Reach out to neighbors and friends, especially those on the fence about guns. Teach non-gun owners firearms safety and then take them shooting. Talk up VCDL at your local gun range or gun club. You’ll be amazed at how many members of clubs and ranges don’t have a clue about VCDL.

A massive Lobby Day on January 20, 2020. Take off work that day, if necessary. This time we are rallying on the Capitol steps for the first time!

VCDL is not going to back down – the fight is on.