Thanks to Sen. Mark Warner for staying on top of this stuff!

The latest installment examines the sources, tradecraft, and analytic work behind the 2017 Intelligence Community Assessment (ICA) that determined Russia conducted an unprecedented, multi-faceted campaign to interfere with the 2016 U.S. presidential election. The installment builds upon the Committee’s unclassified summary findings on the ICA issued in July 2018.

The ICA is informed by highly sensitive sources. In its review of that information, the Committee sought to protect the methods and means by which the U.S. Intelligence Community secured this information. In order to protect sources and methods, the vast majority of this chapter is redacted.

To date, the Committee has released four out of a total of five volumes in its comprehensive report on Russia’s 2016 election interference. The previously released volumes examined U.S. election security, Russia’s use of social media, and the Obama Administration’s response to Russian interference. The fifth and final volume will examine the Committee’s counterintelligence findings.

“In reviewing the ICA, the Senate Intelligence Committee looked at two key questions: first, did the final product meet the initial task given by the President, and second, was the analysis supported by the intelligence presented? We found the ICA met both criteria. The ICA reflects strong tradecraft, sound analytical reasoning, and proper justification of disagreement in the one analytical line where it occurred.

“The Committee found no reason to dispute the Intelligence Community’s conclusions.

“One of the ICA’s most important conclusions was that Russia’s aggressive interference efforts should be considered ‘the new normal.’ That warning has been borne out by the events of the last three years, as Russia and its imitators increasingly use information warfare to sow societal chaos and discord. With the 2020 presidential election approaching, it’s more important than ever that we remain vigilant against the threat of interference from hostile foreign actors.”

“The ICA summarizing intelligence concerning the 2016 election represented the kind of unbiased and professional work we expect and require from the Intelligence Community. The ICA correctly found the Russians interfered in our 2016 election to hurt Secretary Clinton and help the candidacy of Donald Trump.  Our review of the highly classified ICA and underlying intelligence found that this and other conclusions were well-supported. There is certainly no reason to doubt that the Russians’ success in 2016 is leading them to try again in 2020, and we must not be caught unprepared.”

Video: Sen. Mark Warner Says We Need to Do *BOTH* the $579 Billion Bipartisan Infrastructure Package and *ALSO* a Reconciliation Package with Democrats-Only Support 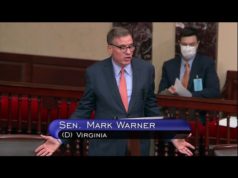