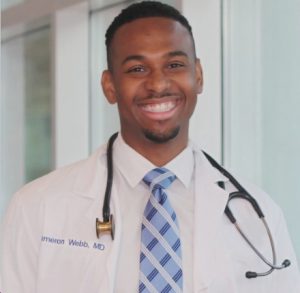 While most of our focus, for good reason, remains on the COVID-19 crisis, democracy and elections continue on in Virginia. For instance, in the 5th Congressional district, currently misrepresented by right-wingnut Rep. Denver Riggleman (R), four Democrats – RD Huffstetler, John Lesinski, Claire Russo and Dr. Cameron Webb – are vying for the nomination, to be decided in a June 9 primary, to try and defeat Riggleman. The Webb campaign reached out to me about doing an interview, focused on COVID-19, and I had a chance to him earlier this afternoon. It was an interesting conversation, and overall I was really impressed with Dr. Webb.  Here are some highlights from the interview, bolding added by me for emphasis. Enjoy! 🙂