History – the good kind! – being made in Richmond!

News release from Mayor Levar Stoney indicates he has ordered the removal of more than just the Stonewall Jackson statue.

We’ll have to see which one is next. pic.twitter.com/V08bPeMHvU

Thousands are out here now getting ready to watch the Stonewall Jackson monument be removed from Monument Avenue. @8NEWS #rva #Virginia pic.twitter.com/7sUoL8c5FE

And Stonewall Jackson is about to go. #Richmond #richmondprotests #blm pic.twitter.com/oyNzzvgS42

JUST IN- @LevarStoney says he ordered the immediate removal a Confederate monuments because “First, that failing to remove the statues presents a severe, immediate and growing threat to public safety.” Second, to help with healing. #RVA @8NEWS pic.twitter.com/XKvPm1pTUH

This moment will make the history books.

The #StonewallJackson statue on Monument Avenue is getting taken down RIGHT NOW. @8NEWS #Richmond #Virginia pic.twitter.com/RdnOd0h8s8 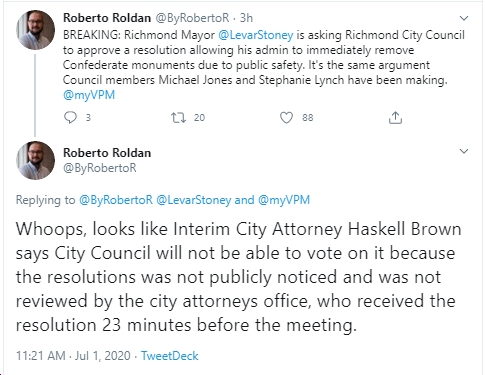 Gov. Northam: “Virginia’s largest monument to the Confederate insurrection will come down this week”