“I look forward to engaging in a spirited debate on the issues most important to Coastal Virginians like affordable, quality health care, ensuring our veterans receive the benefits they’ve earned, and rebuilding our economy and public health system after the COVID-19 crisis,” said Congresswoman Luria, “Scott Taylor has a lot to answer for. From failing to show up for critical votes after losing re-election to the election fraud investigation into his campaign, Taylor continues to disappoint Coastal Virginians.”

Congresswoman Luria’s campaign released the following debates and forums from constituency groups from across Coastal Virginia:

In 2018, Scott Taylor dropped out of a televised debate hosted by WHRO amid his election fraud scandal and refused to participate in any debates that were not ticketed events hosted by the business community. Taylor’s campaign is still under active investigation with more indictments likely to come. Unlike Scott Taylor in 2018, Congresswoman Luria will participate in five discussions on the issues important to her constituents.

Congresswoman Elaine Luria represents Virginia’s Second Congressional District, which includes all of Accomack and Northampton Counties, the cities of Virginia Beach and Williamsburg, as well as portions of Norfolk City, Hampton, and York and James City Counties. Congresswoman Luria serves on the House Armed Services Committee where she is Vice-Chair of the Seapower and Projection Forces Subcommittee and on the House Veterans Affairs Committee where she is the Chair of the Disability and Memorial Assistance Subcommittee. Congresswoman Luria was recently named one of the most effective members of Congress by a 2019 GovTrack Report Card, passing the third most laws of any Representative in the U.S House. In 2018, Elaine Luria flipped VA-02 from a Republican incumbent and is a current Frontline incumbent. 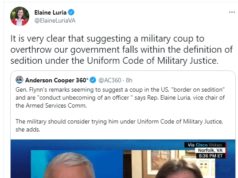