See below for an “important update for your knowledge” from Portsmouth City Manager Lydia Pettis Patton, posted on Facebook by Portsmouth Vice Mayor Lisa Lucas-Burke – who is the daughter of Sen. Louise Lucas – on charges against Sen. Lucas pertaining to the toppling of a Confederate monument on June 10, 2020. According to Lucas-Burke:

“After the events of Wednesday, June 10, 2020, Chief Angela Greene reported a Conflict of Interest as it related to any investigation of the incidents around the Confederate monument…When a city official acknowledges a Conflict of Interest, by law, they must cease all activities on the matter. Otherwise, their participation will likely comprise [sic – presumably she means “compromise?”] the city’s interest.”

Also, see below for video of a “press conference [Wednesday evening] in Portsmouth to address the felony charges against more than a dozen high-profile Black community members, including State Sen. Louise Lucas.”  Among other comments, one activist (Martin Luther King, Jr. Leadership Steering Committee president Milton Blount) stated, “we have seen this movie before” in which the police are used to “impugn their character, make them look like they’ve committed a crime,” arguing that Sen. Lucas was there for just a “brief period [during] the early part of the day, and then she left to go home” (note that the statue was torn down at around 9:46 pm, about three hours after Sen. Lucas was there). Blount then called for the “immediate resignation of [Portsmouth Police Chief] Andrea Greene,” as well as for the Virginia State Police “to conduct an investigation into the Portsmouth Police Department,” and for Commonwealth’s Attorney Stephanie Morales to do “all that she can do to use her influence to throw all of these arrests out so that it does not light of day in any courtroom.”

Check out the video, below, which also includes comments by Vice Mayor Lisa Lucas-Burke and Del. Don Scott, who charged that the “criminal punishment system” is being “weaponize[d]…against Black leadership.” According to Del. Scott, we are now “70 days later” [since the statue was torn down] and asked, “what were the police doing at that time…they were there from the beginning to the end, they should be arrested their damn selves – for dereliction of duty.”

We’ll see how this plays out in coming days and weeks, but for now, clearly the charges against Sen. Lucas and others have elicited a strong reaction… 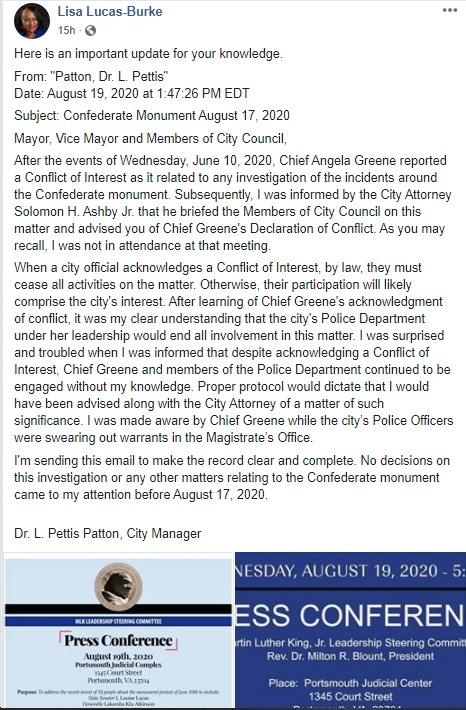