“In the evening hours of December 10, 2020, my office was notified that an officer involved shooting had occurred in the Four Seasons community of Prince William County. My office immediately instituted and coordinated an incident response team independent of any investigation conducted by the Prince William County Police Department. Over the next two weeks, the incident response team reviewed all accessible investigative information. While the incident response team is currently preparing a full report detailing factual findings, the team has completed our review of the incident and legal analysis. I sent the attached letter sharing our conclusion of the review and analysis to the Prince William County Police Department last week so that they may take whatever actions they deem appropriate. My office will make an appropriately redacted version of the full report on this incident public once it has been completed. We thank you for your patience regarding this matter.”

The conclusion is as follows:

“In this incident, the danger posed by the decedent was real. Having the benefit of bodyworn camera footage, video footage from FX2 helicopter, and forensic collection at the scene, it is clear that the Officers apprehended imminent bodily harm as the subject raised his gun at the Officers while walking towards them and saying, “Shoot me.” Each of the Officers expressed that they believed either they, individually, were in danger of being killed or that the other
officers present were in danger of being shot or killed. The decedent’s actions in walking toward the officers with his arm raised and a gun in his hand aimed at the Officers left the Officers no alternative but to use deadly force.  Accordingly, I find that the use of deadly force was both
justified and reasonable under the circumstances of this tragic encounter.” 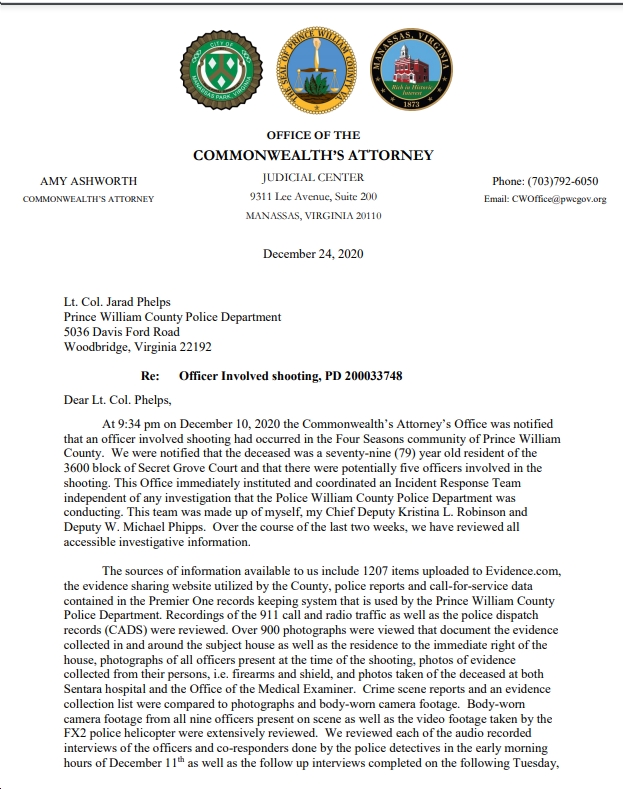 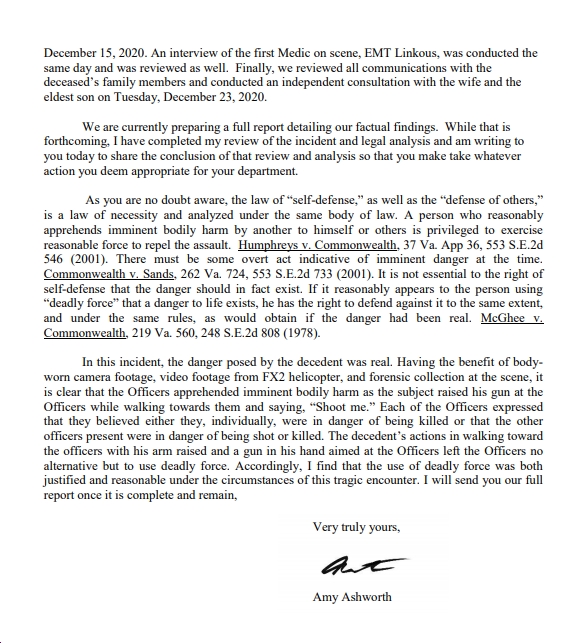 AG @MarkHerringVA's office: "The Plaintiffs, who are fighting to keep the Lee statue up, have filed a petition for appeal this afternoon in Taylor v. Northam" https://bluevirginia.us/2021/01/monday-news-renewables-chief-hails-crucial-biden-climate-agenda-lawmakers-threatened-ahead-of-impeachment-trial-fauci-on-what-working-for-trump-was-really-like-tim-ka#comment-5241792816