See below for a letter by a number of Black leaders from Arlington, Loudoun, Richmond, Petersburg, Dumfries and Prince William County, regarding their support for Jennifer Carroll Foy for governor:

To the People of Virginia,

We represent communities across Virginia that are driven by Black excellence. We’re small business owners, mayors, local representatives, and activists. We’re moms and dads, brothers and sisters, aunt and uncles. We have seen the ways that the status quo in Virginia has left our communities behind — and also how those very same communities bounce forward in the face of adversity.

In Virginia, we’ve always been told that in the former capital of the Confederacy, status quo politicians will continue to rule the day. We’ve been told that the same folks who refused to investigate police brutality, or made deals with special interests that lead to violence on our streets, are the ones in power, and that it will never change.

But we’re here to tell you that they’re wrong.

We finally have the opportunity to elect a Governor who understands our pain — not because they read about it in the news, but because she lived it. We have a candidate with a plan to help our small businesses, get our kids a good education, address the Black maternal mortality rate, and most of all, create good jobs with benefits that can support a family.

That candidate is Jennifer Carroll Foy.

A public defender, daughter of Petersburg, VMI graduate, foster mom, and Delegate, what could be better than that?

The thing is, we had a choice between other candidates in this race. And others may have made history themselves. But Jennifer Carroll Foy is the candidate who gets us. Who has the real plans to lift up every last one of us. And over the course of the campaign, it has become clear that out of all the candidates who can bring a new face to the governor’s mansion, she’s the only candidate in the race with the resources and game plan to get voters to the polls and win. It’s not even close.

We hope you’ll join us in supporting Jennifer Carroll Foy if you want to help bring Virginia into the future.

“Inevitability is a choice made by those not willing to fight hard enough for a different outcome.” 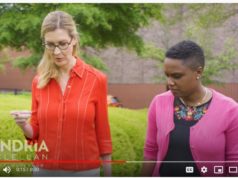