Check out this excellent post by Alex Sakes (also, see below) on yesterday’s “Vigil for Asian Americans And Pacific Islanders” in Arlington, with the added bonus of an excellent, short history lesson into the rise – and, sadly, the fall – of the “Little Saigon” next to Clarendon Metro. As Sakes explains, after “rents began to spike around ‘Little Saigon’…a wave of displacement [began] for Vietnamese Arlingtonians who had previously settled themselves across Arlington’s numerous garden apartment complexes,” with many “Vietnamese residents began moving westward, settling around the areas of Seven Corners and Falls Church as a result.” Anyway…check it out; very interesting. Also, when this pandemic is over, I’m definitely heading out to the Eden Center in Falls Church!

The evening’s backdrop, Clarendon, has held deep sentimentalism in the hearts of AAPI Arlingtonians for generations:

Toward the end of the Vietnam War, immigration from Vietnam to the United States increased dramatically after the “Fall of Saigon” in 1975. Five years after Saigon fell, the population of Vietnamese Americans residing in the United States rose from 15,000 to 245,000. During that span, the Washington D.C. area presented itself as a desirable destination to many of the 800,000 Vietnamese refugees who would flee war-torn, Communist Vietnam by boat as many first-wave immigrants held previous ties to the U.S. government or embassy. In particular, Clarendon became conducive to resettlement as the construction of the Clarendon Metro station during the mid-1970s tore up the surrounding streets and sidewalks, leading to a rise in availability for inexpensive, short-term commercials leases which Vietnamese refugees used to open their own businesses and support their families. Affectionately referred to by the Vietnamese community as “Little Saigon”, the Clarendon neighborhood rapidly became a thriving cultural hub as Vietnamese refugees traveled from as far as North Carolina and Tennessee to shop and to connect with others from Vietnam.

On November 18, 1989, the Arlington County Board unanimously endorsed Clarendon’s redevelopment plan of high-rise commercial structures, mid-rise residential buildings, parks, and pedestrian walkways. The plan proposed incentives for constructing buildings lower than the zoning code allowed, alongside carving out smaller-scaled commercial space for smaller-scale businesses.  Eventually, rents began to spike around “Little Saigon’, thus beginning a wave of displacement for Vietnamese Arlingtonians who had previously settled themselves across Arlington’s numerous garden apartment complexes. Vietnamese residents began moving westward, settling around the areas of Seven Corners and Falls Church as a result.

May we use this vigil to re-affirm our support for our APPI neighbors and community members in these trying times as we stand with them against the white violence and systemic racism that has stolen the lives of so many in these recent weeks. And may we fight for truth and reconciliation regarding the ever-present and historical inequities woven deep within Arlington County. 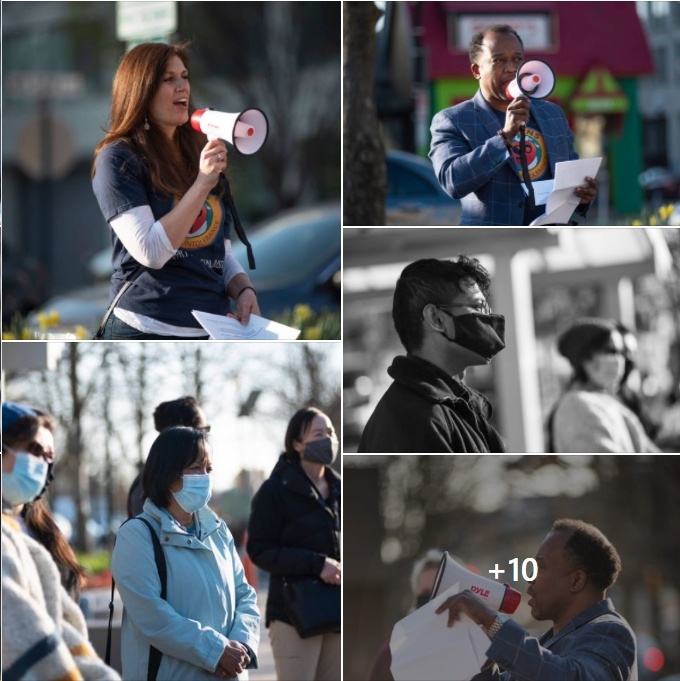