According to reports, Brown received a ride home from the deputy after his car broke down. After the deputy left, Brown called 911 and the same deputy responded. While responding to the call, the deputy shot Brown 10 times. Brown remained in intensive care as of Thursday.

“Our hearts are with those affected by this tragic police shooting,” said David Manning, a volunteer with the Virginia chapter of Moms Demand Action. “Isaiah Brown and his family now join the hundreds of thousands of gun violence survivors in our state and around the country who know the devastation of gun violence. We join our partners in calling for a swift, transparent, and thorough independent investigation of this shooting.”

To reduce police violence and the disproportionate impact it has on Black and Latino communities, it is essential that every law enforcement officer in the U.S. works for an agency with evidence-based policies—strong guardrails on when police may use force against civilians, ensuring police are held accountable when force is used, and prioritizing de-escalation, dignity, and respect.

Research suggests that implementing specific use-of-force policies can save lives. One 2016 study of 91 large police departments found adoption of use-of-force reform policies—exhaustion of other means prior to shooting, bans on chokeholds and strangleholds, use-of-force continuum, de-escalation, duty to intervene, restrictions on shootings at moving vehicles, and warning before shooting—was associated with fewer people killed by police.

In an average year, 1,019 people die by guns and 2,050 people are wounded by guns in Virginia. Black people are eight times more likely than white people to die by gun homicide in the state. More information on gun violence in Virginia is available here. 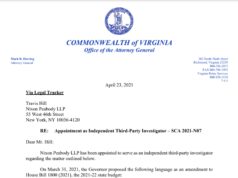 With Days To Go Until Their Convention Of Chaos, Virginia GOP Is In Shambles (“But it has been successful in one sense: it’s shown Virginians the GOP’s true colors") https://bluevirginia.us/2021/05/with-days-to-go-until-their-convention-of-chaos-virginia-gop-is-in-shambles