With more than a 20-point lead in public polling, Mark Herring touts an impressive progressive record to represent Democrats as Attorney General

“With an unparalleled track record of progressive victories over the past seven years and a bold approach to addressing systemic racism, consumer protection, immigrant rights, and gender and LGBTQ equality, there’s no secret why we have the support of so many voters across the commonwealth,” said Farah Melendez, Herring for Attorney General Campaign Manager. “We are putting significant resources behind the Attorney General’s record to remind Democratic voters that he’s pushed the envelope to expand and protect people’s rights since his very first day on the job.”

Early voting is underway and closes on June 8th. Public polls indicate Mark Herring has a more than 20-point lead in the race, and will face extremist Republican Jason Miyares in November. 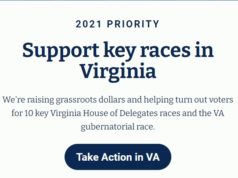 This is happening tonight at 6:30 pm - two of the most extreme, worst members of Congress (and that's saying a LOT!), Bob Good (R-VA05) and Lauren Boebert, holding a fundraiser together https://bluevirginia.us/2021/06/friday-news-big-oils-increasing-number-of-climate-lawsuits-draws-parallels-to-big-tobacco-biden-claims-bipartisan-win-with-deal-on-infrastructure-conservatives-think-theyv#comment-5432640184