See below for a press release from Wild Virginia on the fracked-gas Mountain Valley Pipeline boondoggle. For more on that subject, also see Fitch Affirms EQM Midstream Partners at ‘BB’; Outlook Negative (“Mountain Valley Pipeline Further Delayed: EQM announced in early May, 2021 that MVP’s completion has experienced another delay due to regulatory and permitting hurdles. The company does not expect to receive all the required waterbody and wetland crossing authorizations by 3Q21 as previously anticipated, postponing the planned in-service date to summer of 2022 from end 2021 at higher project cost of approximately $6.2 billion. Fitch had previously expected the in-service date to be late 2021, at an approximate cost of $6.0 billion. From inception, this project has encountered several setbacks leading to large schedule delays and cost overruns, mainly due to permitting and environmental challenges.).

On May 13, 2021, the Federal Energy Regulatory Commission (FERC) sent a letter to the Virginia Department of Environmental Quality (DEQ) (attached) asking for that agency’s opinion as to the State’s authority to review a proposal by Mountain Valley Pipeline (MVP). MVP is trying to evade Clean Water Act reviews for possible impacts to 182 waterbodies, many of them in Virginia, by boring holes and pushing pipe underneath streams and wetlands.

The state must exert its rightful authority to review and deny permitting of that plan.

The Northam administration has recently taken a strong stand to defend its authority related to a Corps of Engineers permit proposal, insisting that the state cannot perform an adequate review on MVP’s plan to cut and blast through hundreds of our waterbodies in less than a year and seeking an extension from the Corps reflecting that need.

David Sligh, Wild Virginia’s Conservation Director, stated: “We have applauded our officials for their defense of state authority to thoroughly review MVP’s proposal to the Corps. We expect they will do the same in this case. Virginian’s have a right to be involved in this important decision and the DEQ and State Water Control Board must reject this latest proposal, because we think it’s clear that an honest and open review will show that MVP can’t meet our water quality standards under this flawed and dangerous plan.”

Background
Whenever a federal agency considers permitting an action that “may” create a discharge and affect state waters, officials in the affected, states must review that activity before the federal agency can allow the project to proceed – Congress explicitly reserved this veto power for the states when it adopted the CWA in 1972. Section 401 of the Act gives the state the option to issue or deny a water quality certification or to waive its authority to act.

The actions MVP now wants to undertake in drilling under dozens of sensitive Virginia streams not only “may” result in discharges to our waters, they will certainly do so. Huge pits will be dug on each side of the waterbodies to allow use of boring equipment and handling of the pipes, and water will accumulate in those basins. That water, which will sometimes be filled with mud and other substances, will be pumped out of the pits and end up in our waters. The threat of mud-choked streams is very clear, as MVP has already demonstrated repeatedly in “upland” construction.

Another dire threat from the boring operations is that chemicals and other materials can break through the soil and rocks from below and emerge in the streams, causing sometimes catastrophic damages. Communities in Ohio and Pennsylvania  have seen their waters fouled by drilling for pipelines on numerous occasions. The fragile and unpredictable geologic structures in western Virginia make these kind risks all too real and MVP has not presented studies or planned procedures that will ensure these horrors don’t happen here. Also, MVP has not demonstrated that it will live up to requirements to protect the environment and there’s no reason to assume they’ll do better in the future.

We trust that the Virginia DEQ will tell FERC in no uncertain terms that it has the authority and duty to review this MVP scheme and that it will defend its position. 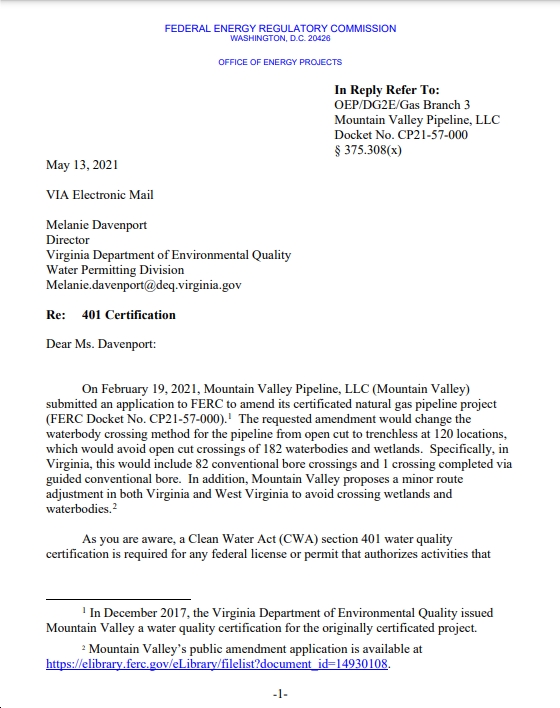 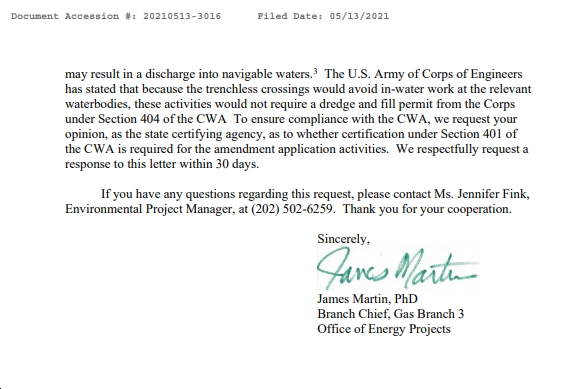