So what do those ads look like, and what’s running right now? I just checked the Facebook ad library and found the following ads running. First off, here’s the ad you’ve probably heard about, by Clean Virginia, going after Hala Ayala for taking money from Dominion after pledging not to do so. According to Clean Virginia, it’s spending a massive $125,000 on these ads in the closing days of the primary campaign, so clearly a LOT of people are seeing these… 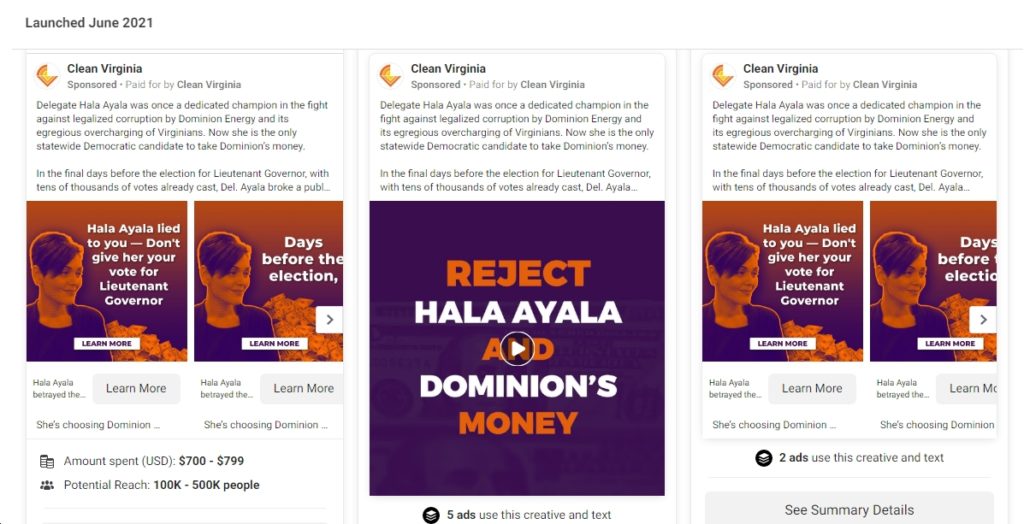 Next, here are the Facebook ads for governor that are currently listed as running. The only two candidates I found were Terry McAuliffe and Jennifer Carroll Foy, with Jennifer McClellan’s Facebook ads expiring back in early or mid-May, a delegate ad for Lee Carter, and nothing at all for Justin Fairfax.

Now, here are the LG candidates’ FB ads that are currently listed as active…by Sam Rasoul, Andria McClellan, Sean Perryman and Mark Levine. No sign of anything by Hala Ayala or Xavier Warren… 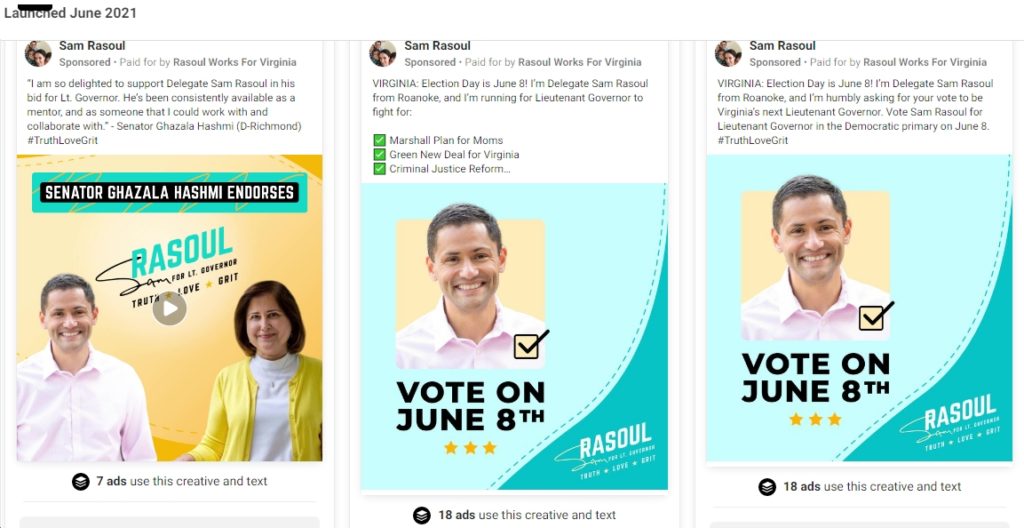 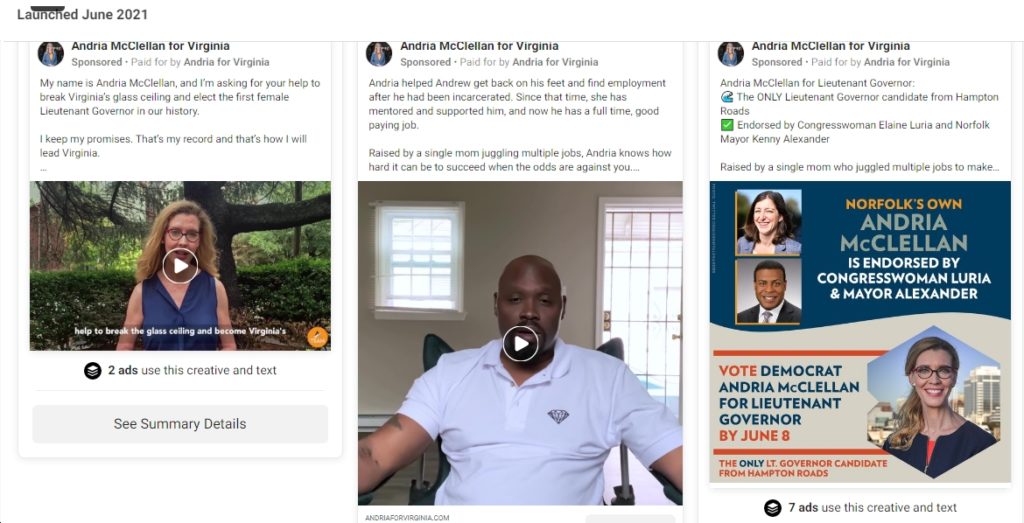 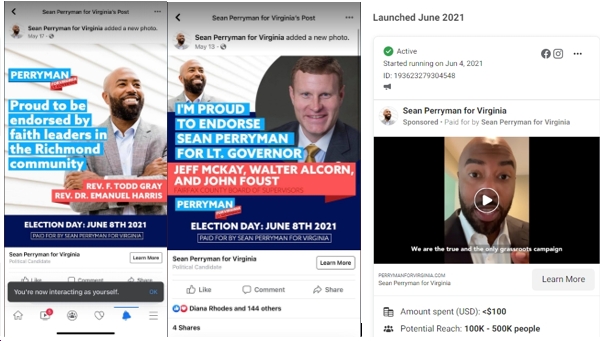 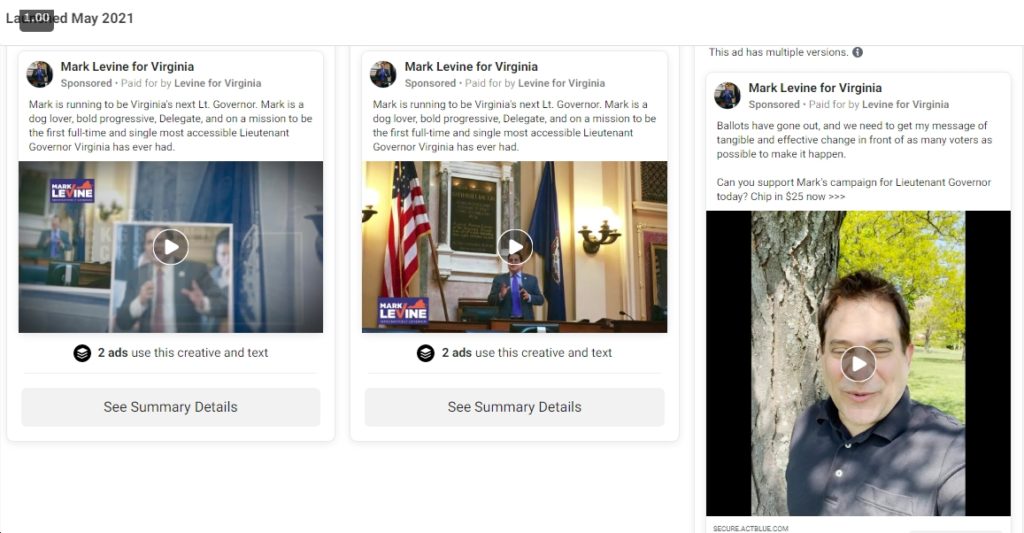 And finally, here are the AG candidates’ Facebook ads that are listed as active…by Mark Herring and Jay Jones. 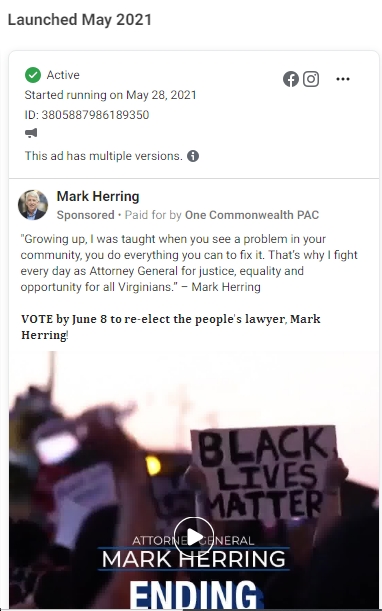 This statement by the @LoudounDems should be glaringly obvious, but there are those who don't agree, sad to say... https://bluevirginia.us/2021/06/tuesday-news-obama-backs-manchins-voting-rights-compromise-before-crucial-senate-vote-sinemas-pathetic-op-ed-backing-filibuster-the-day-of-reckoning-has-arrived-for-the-ncaa-ran#comment-5429481665

More from Sen. @timkaine: "So what's next? We have to pass voting rights...we are not accepting failure on this existential issue. The burden is on Democrats' shoulders now, and we're going to move forward and find solutions." https://bluevirginia.us/2021/06/tuesday-news-obama-backs-manchins-voting-rights-compromise-before-crucial-senate-vote-sinemas-pathetic-op-ed-backing-filibuster-the-day-of-reckoning-has-arrived-for-the-ncaa-ran#comment-5429478957