From Planned Parenthood Advocates of Virginia:

With reproductive rights under attack across the country, the stakes have never been higher

“After the worst year for reproductive rights in decades and the Supreme Court taking up a case that could overturn Roe v. Wade, reproductive rights are under threat like never before. We need bold leadership to increase access to health care for all Virginians now more than ever.

“Planned Parenthood Advocates of Virginia is proud to endorse Terry McAuliffe, Hala Ayala, and Mark Herring because we know they stand with the majority of Virginians who support access to safe, legal abortion. With a pro-reproductive health General Assembly, we know that essential health care and reproductive rights will be protected, and that these leaders will ensure sexual and reproductive health care is accessible to every Virginian regardless of their ZIP code or how much money they make.”

“These endorsed candidates are not only tireless supporters, but proven leaders. Collectively they have removed obstacles to abortion access, ensured that all forms of birth control are available to patients who want it, and fought for those most impacted by policy decisions.” 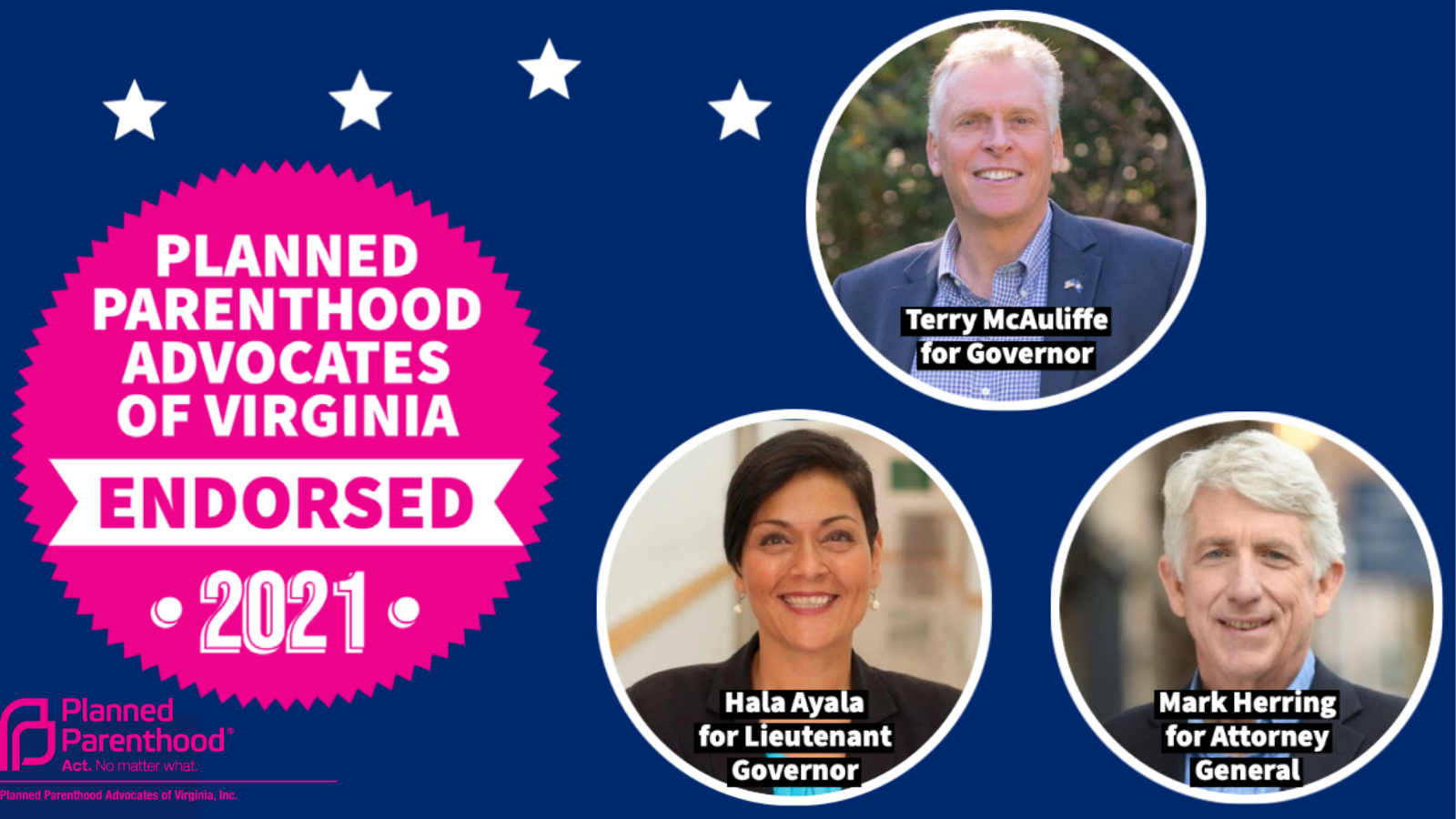 During his time as governor, Terry McAuliffe stood up for the thousands of people who turn to Planned Parenthood for services, vetoing the defunding bill two years in a row. Gov. McAuliffe’s veto ensured that Virginians could continue to access high-quality, affordable, and non-judgmental health care, including annual wellness visits, STI testing, birth control, and cancer screenings. Gov. McAuliffe has demonstrated a clear commitment to expanding access to care by proposing the Contraceptive Grant Program, which provides free birth control for Virginians with low incomes.

As the delegate for Virginia’s 51st District, Hala Ayala has fought for reproductive health care for all Virginians. Her leadership for reproductive and gender equality have contributed to the progress Virginia’s families have made over the past few years, despite many obstacles. Not only has she been a champion in this fight, she already has a plan to protect bodily autonomy and expand access to care. We can trust her to be the leader we need to break ties in the State Senate, to foster proactive measures that center equity and keep Virginia moving forward. Virginia is quickly becoming the beacon of hope for other states in the south reaching towards progress, due in large part to Delegate Ayala’s action in the General Assembly.

There is no doubt that Attorney General Mark Herring has fought for reproductive rights in the Commonwealth during his tenure. Not only has he been an ally in Virginia, fighting to overturn rules intended to ban abortion and shame patients, he has fought legislation that would have defunded Planned Parenthood elsewhere. Attorney General Herring supported a challenge to an Ohio law that would have barred health care providers who provide or offer information about abortion from all public health funding, joining a coalition of 16 attorneys general to file an amicus brief with the U.S. Court of Appeals for the 6th Circuit. We can trust that an AG Office under Mark Herring would not stall or derail Virginia’s progress, but will strengthen and expand access to care.

Planned Parenthood Advocates of Virginia will be announcing endorsements for the House of Delegates next week.

Planned Parenthood Advocates of Virginia (PPAV) is a statewide advocacy organization whose mission is to preserve and broaden access to reproductive health care through legislation, public education, electoral activity and litigation in the Commonwealth of Virginia. PPAV works to ensure that individuals and families have the freedom, information, and ability to make their own informed reproductive choices.