It’s hard to believe that the Republican Party in general, and the Virginia GOP(Q) specifically, have descended so far from a party of conservative values to basically a Trump-worshipping, conspiracy-theorizing, science-rejecting death cult, but…sadly, that’s exactly what it’s done. For instance, see below, as Virginia GOP Chair calls Florida Gov. Ron DeSantis – an unmitigated disaster by almost any metric – “the face of real leadership…that formed, built, and sustained America for all her people.” To the stark contrary, check out some of the recent stories about Florida, under DeSantis’ disastrous “leadership”:

So what about this disaster does VA GOP Chair Rich Anderson consider to be “the face of real leadership?” Also, given that Anderson views DeSantis as a role model for governors, what does that tell you about his support for Glenn Youngkin as Virginia’s next governor? In short, if you want the disastrous “leadership” we’re seeing right now in Florida, then by all means vote for Youngkin here in Virginia! If, on the other hand, you have some sense and do NOT want the Florida fiasco repeated here in the Commonwealth, then obviously vote Democratic up and down the ticket on November 2nd! 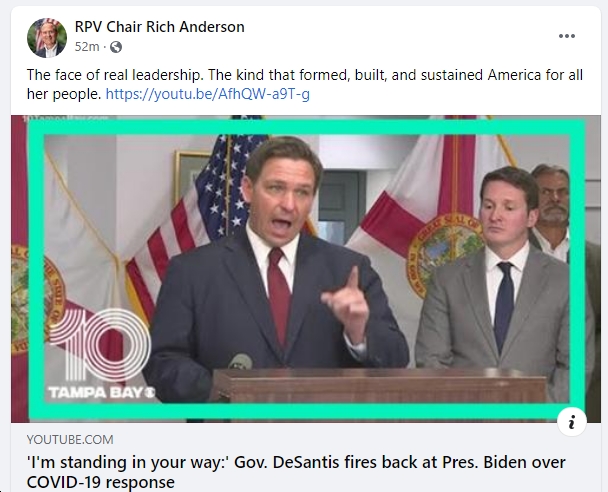 ‘The Pied Piper leading us off a cliff’: Florida governor condemned as Covid surges https://t.co/7YbDfyZBzz

Florida gubernatorial candidate @NikkiFried (D) calls out Gov. Ron DeSantis (R-FL) for “spewing misinformation” about COVID and “flirting with individuals who are anti-vaxers and anti-maskers.” pic.twitter.com/at7q5swZ14

Has Ron DeSantis no sense of decency? No. Blaming the Covid surge in his state on … Biden letting too many people cross the border 1/ https://t.co/9LgskGD7cw

This is the NEW BIG LIE.

I hate to repeat it, but we have to speak out against this scapegoating.

The guv has totally failed us. pic.twitter.com/ikoLqRZtti

.@MaddowBlog: Gov. DeSantis marveled at President Biden’s willingness to “single out Florida over Covid.” But it’s worth emphasizing that Biden didn’t single out Florida; Florida singled out Florida with its intensifying crisis. https://t.co/bKzl7W8xwG

As Florida breaks new case records and leads the nation in children hospitalizations, Ron DeSantis is blaming anyone but himself and continues to undercut safety measures to “own the libs.”

But hey! At least the rising deaths are good business!

Analysis Tweet- @GovRonDeSantis Politically, it’s another brutal day for the flailing DeSantis. He has gambled and lost. Weeks ago he was laying in bed and no doubt the pillow talk was all about the Inaugural Ball. He rolled Trump, stiffed him, in fact DeSantis told the Leader