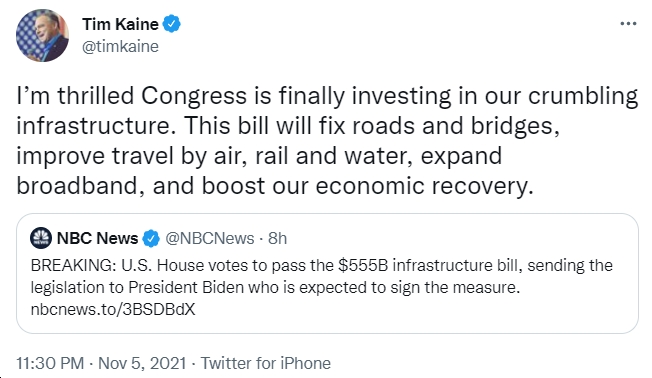 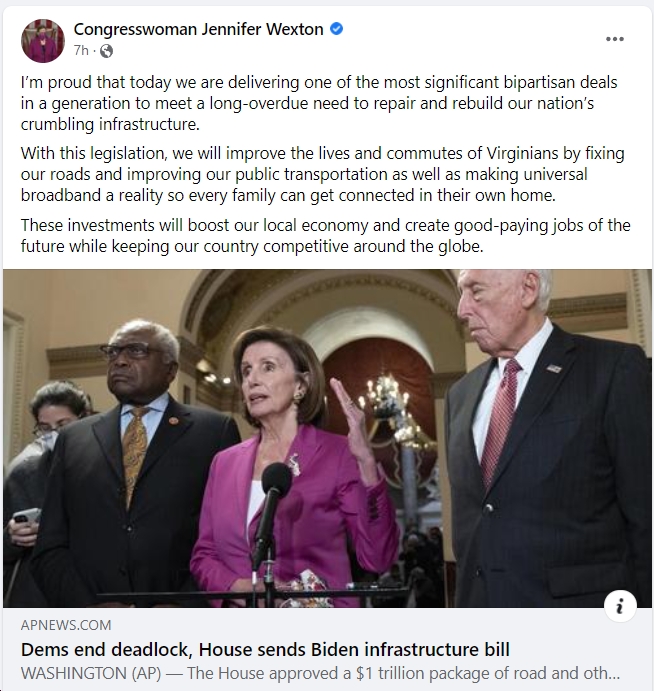 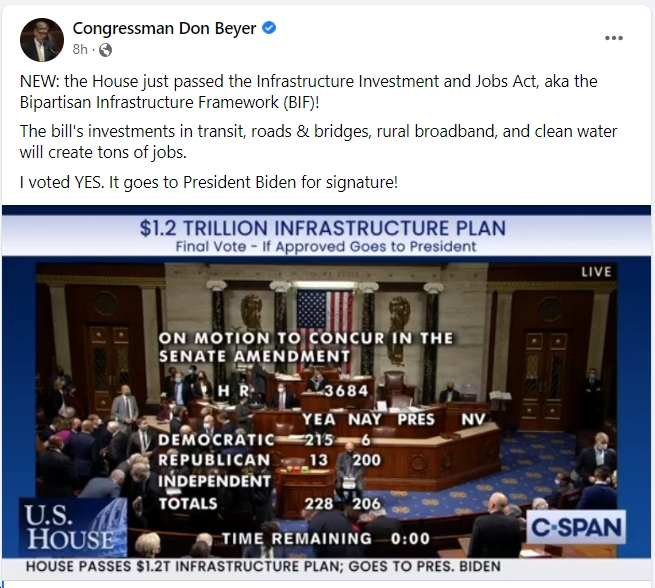 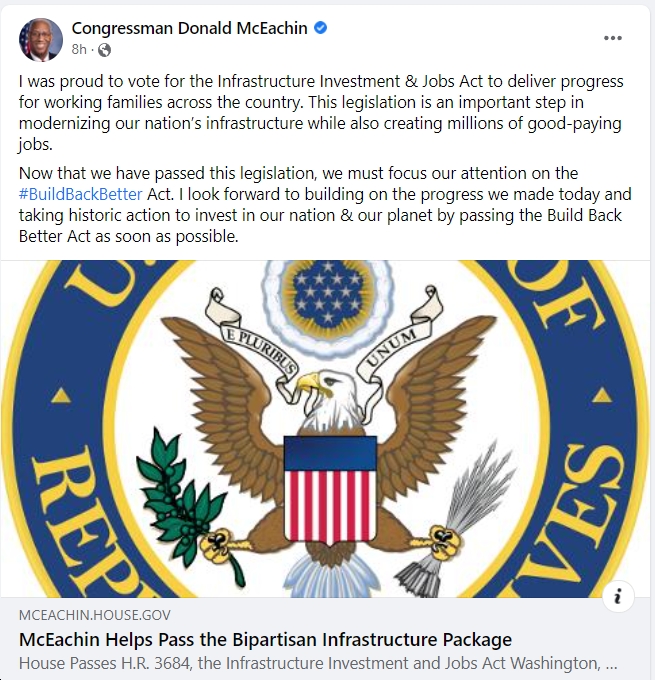 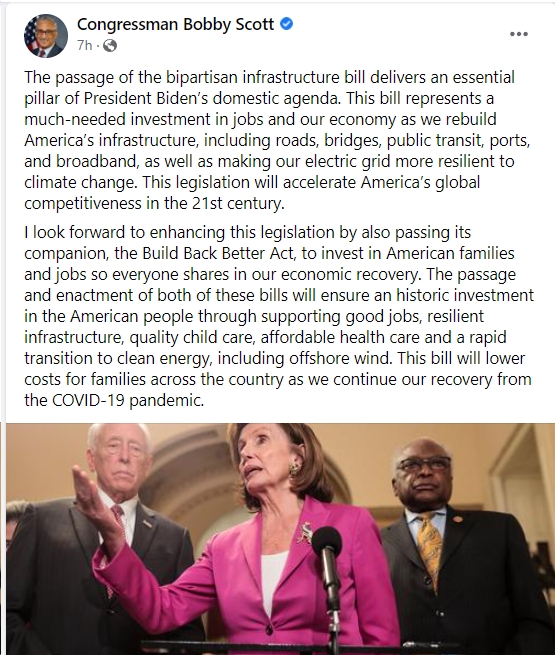 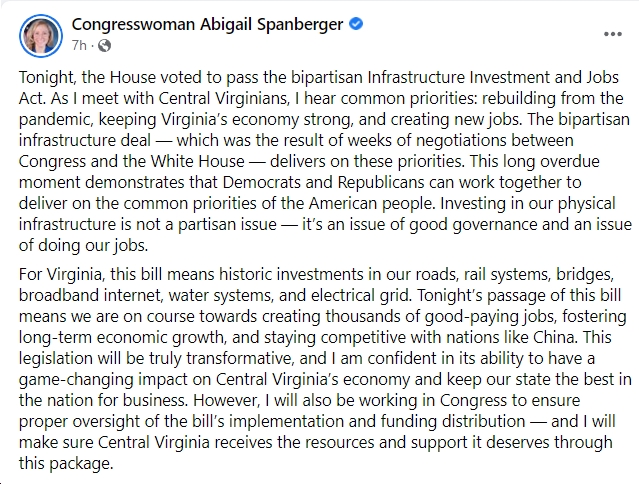 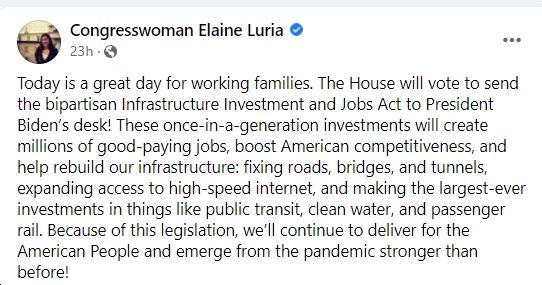 ~ On House passage of the Bipartisan Infrastructure Investment and Jobs Act ~

“With tonight’s passage in the House of Representatives, Congress is finally doing what it has been promising for generations: investing in America’s infrastructure. This bipartisan package will fix crumbling roads and bridges, improve travel by air, rail and water, expand broadband access and boost our economic recovery. We are proud that this bill is now heading to the President’s desk for signature, and we look forward to working with our colleagues and President Biden in the days and weeks ahead to enact further priorities to help Virginians.”

The Bipartisan Infrastructure Investment and Jobs Act is a comprehensive infrastructure package that delivers wins to communities across the Commonwealth and the nation to maintain our roads, bridges, rail systems, and other critical infrastructure needs, including:

·       $110 billion to repair and rebuild our roads and bridges with a focus on equity, safety for all users, including cyclists and pedestrians, and first of its kind attention to climate change mitigation and resilience. This includes:

·       Renews the federal funding commitment for WMATA through fiscal year 2030 at current annual levels. The federal government’s commitment to WMATA funding is based on legislation previously introduced by Senators Warner and Kaine.

·       $66 billion for passenger and freight rail to upgrade speed, accessibility, efficiency, and resilience, including $22 billion in grants to Amtrak, $24 billion as federal-state partnership grants for Northeast Corridor modernization, $12 billion for partnership grants for intercity rail service including high-speed rail, $5 billion for rail improvement and safety grants, and $3 billion for grade crossing safety improvements.
·       These dollars will help Virginia fund current projects announced with CSX, Norfolk Southern, Amtrak, and VRE — such as the $1.9 billion Long Bridge project that both Senators Warner and Kaine supported by successfully passing their Long Bridge Act of 2020 as part of the FY21 Omnibus. The legislation allowed for the construction of a new Long Bridge across the Potomac River to double the capacity of rail crossing between Virginia and DC, but still required federal funding to move forward.

o   This funding will improve reliability and travel options not just in Virginia, but along the East Coast.

·       $25 billion to improve our nation’s airports including runways, gates, terminals, and concessions.
·       $17 billion for port infrastructure to fund waterway and coastal infrastructure, inland waterway improvements, and land ports of entry.

·       $65 billion for broadband deployment to increase access and decrease costs associated with connecting to the internet.
·       Virginia will receive a minimum allocation of $100 million to expand broadband across the Commonwealth, including providing access to the at least 473,000 Virginians who currently lack it.
·       1,908,000 or 23% of people in Virginia will be eligible for the Affordability Connectivity Benefit, which will help low-income families afford internet access.

·       $47 billion for climate resilience measures that will help our communities weather increasingly severe storms, droughts, floods, fires, heat waves, and sea level rise, including funding for FEMA flood mitigation grants, making infrastructure investments to increase coastal resilience, and improving mapping and data so that households and businesses can better protect themselves from future flood events.
·       $238 million for the Chesapeake Bay Program for ecosystem resiliency and restoration.

·       $7.5 billion to build electric vehicle charging stations across the country along highway corridors to facilitate long-distance travel and within communities to provide convenient charging where people live, work, and shop.
·       $2.5 billion for electric, zero-emission school buses.
·       An estimated $106 million for Virginia over five years to support the expansion of an EV charging network in the Commonwealth. Virginia will also have the opportunity to apply for the $2.5 billion in grant funding dedicated to EV charging in the bill.

·       The legislation includes a provision based on Senator Kaine and Senator Wicker’s Reaching America’s Rural Minority Businesses Act, introduced in May 2021.
·       The provision will enable the Minority Business Development Agency to partner with Historically Black Colleges and Universities (HBCUs) and other Minority Serving Institutions (MSIs) to establish business centers to support minority-owned small businesses in rural areas to provide education, training, and technical assistance to help them grow and thrive.