The citizen shared this with me. Mr. Redd sent this *before* he was appointed. Mr. Redd had broadcast his opposition to following Virginia law and to including and accommodating Hanover’s transgender and nonbinary students, and stated clearly that he knew Mr. Daniel would not be re-appointed and that a rightwing Christian would be.

Mr. Redd’s statement in the Richmond Times-Dispatch was already disqualifying but I think that many, present company included, were ready to give Mr. Redd a chance. Now, he MUST first disavow this stance and pledge to follow the law and serve ALL students and families. Otherwise, he should resign.

Supervisor Peterson may also be obligated to resign. At the very least, the appointment process should be re-done. It’s clear that the rest of the nominees were not given fair consideration to be appointed. Even more so, Supervisor Peterson’s process violated the U.S. Constitution-not only was he requiring his appointee to commit to breaking Virginia law and engage in discrimination, he was requiring that they be a conservative Christian. That’s a violation of the U.S. Constitution and of religious freedom and equality. Article VI of the U.S. Constitution specifies that “no religious Test shall ever be required as a Qualification to any Office or public Trust under the United States.” This prohibition is known as the No Religious Test Clause.

Please contact Mr. Redd (SB-jredd@hcps.us) and Supervisor Peterson (wcpeterson@hanovercounty.gov), and your Hanover Board of Supervisor members (go to: https://www.hanovercounty.gov/427/Board-of-Supervisors), and let them know, we need a fair School Board appointment process, appointees & School Board members who will obey the law and not engage in discriminatory policy-making and who will serve ALL students and families, and that there must be NO religious test for appointees as that violates the Constitution and tenets therein of religious freedom and equality. 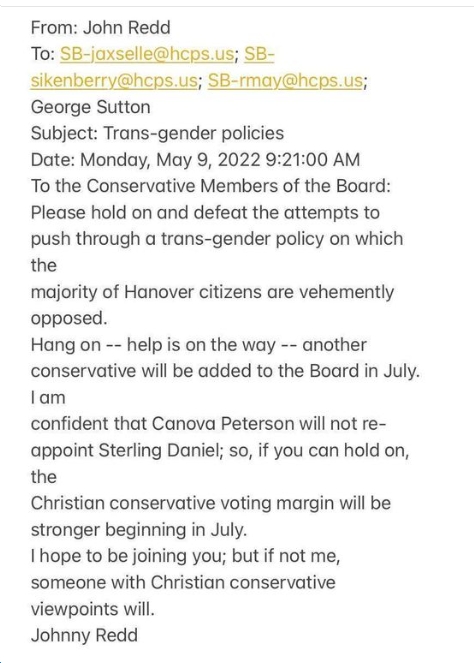 Day After Swastika-Shaped-Logo Controversy, Hanover School Board to Consider Policy Requiring Extensive Background Check for a Transgender Student to Use the Bathroom