Among the news stories that jumped out at me this morning was this one by Reuters, which reports:

“United Arab Emirates authorities have detained Asim Ghafoor, a U.S. citizen and civil rights attorney who previously served as a lawyer for slain journalist Jamal Khashoggi, said U.S.-based rights group DAWN of whose board Ghafoor is a member.

A UAE government official confirmed Ghafoor was arrested while transiting through Dubai International Airport on July 14 on charges related to an in absentia conviction for money laundering pursuant to evidence heard by Emirati courts.

Reuters adds that a  “senior U.S. administration official” said “there’s no indication that it has anything to do with the Khashoggi issue,” but it’s certainly concerning that Ghafoor – “a civil rights attorney based in [Loudoun County] Virginia…en route to Istanbul to attend a family wedding”  – was arrested, that there’s so little transparency on this case, etc.

See below for tweets by Rep. Jennifer Wexton and Rep. Gerry Connolly about this case. According to Rep. Wexton: “I am seeking answers from the UAE government to what appears to be a politically motivated arrest of my constituent, Asim Ghafoor. Upholding fundamental rights, including due process protections, is critical to the U.S.-UAE relationship.” As for Rep. Connolly, he tweeted, “Asim Ghafoor must immediately be released from this unjust detention.”

Also, see here (and below for excerpts) for a post by Atif Qarni, who served as VA Secretary of Education in Gov. Ralph Northam’s administration, about this case.  According to Qarni:

By the way, as Atif Qarni points out, Ghafoor has donated tens of thousands of dollars to Virginia state candidates, basically all to Democrats, as well as to federal candidates, including Joe Biden and many others. Now, of course that shouldn’t have anything to do with whether or not the U.S. government demands “answers from the UAE government to what appears to be a politically motivated arrest” or a U.S. citizen, but the fact that he’s been actively involved in Virginia politics and lives in Loudoun County definitely should get the attention of Virginia elected officials, from Senators Warner and Kaine to our Congressional delegation. 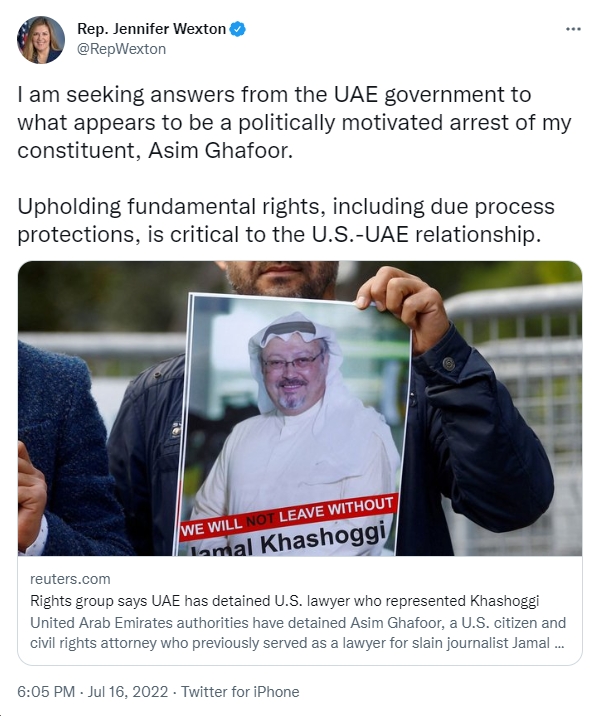