With regard to SD21, see below for a new polling memo from Del. Angelia Williams Graves in this heavily “blue,” majority-minority Norfolk-based district. According to the memo – and, of course, consider that this is an “internal,” so take it with the requisite grains of salt of course – Graves starts off with a 14-point edge over her main rival, Andria McClellan, and “her lead surges to 22 points after voters hear candidates’ biographic statements on each of their websites.” One reason for Graves’ lead: “A majority (61%) believe it is important to have a Black state senator representing this district.” Of course, money will also be a big factor, and as of the end of 2022, McClellan had $122k cash on hand, while Graves had $90k, while McClellan raised $203k and Graves raised $133k during the second half of last year. Anyway, it should be an interesting primary…and let the best Democrat win!

NORFOLK, VA – After a strong finance report covering the second half of 2022, where Delegate Angelia Williams Graves outraised her Democratic opponent by more than $30,000, new polling shows her with a comfortable lead in her race for State Senate.

Holding an initial 14-point advantage, her lead surges to 22 points after voters hear candidates’ biographic statements on each of their websites. You can see the polling memo attached to this email.

“As Delegate Williams Graves heads to Richmond this week to fight for the values that matter most to Norfolk, our campaign for State Senate is catching fire and gaining momentum,” said campaign manager Sandra Brandt. “It’s clear voters respect the decades of service Delegate Williams Graves’ has provided to the City, and are excited for her vision and continued leadership in the General Assembly.”

Delegate Angelia Williams Graves has served the people of Norfolk in various capacities since 2001. Most notably as City Councilwoman for 10 years, serving as Vice-Mayor from 2014-2016, going on to be elected to the House of Delegates in 2021, where she currently serves. Born and raised in Norfolk, a graduate of Booker T. Washington High School, Tidewater Community College, and Old Dominion University, Williams Graves is now running for State Senate to continue her service to her hometown. 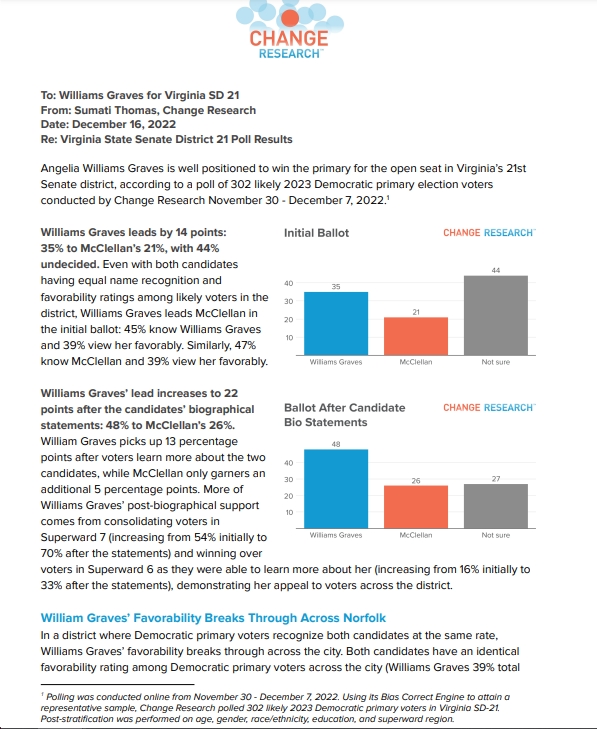 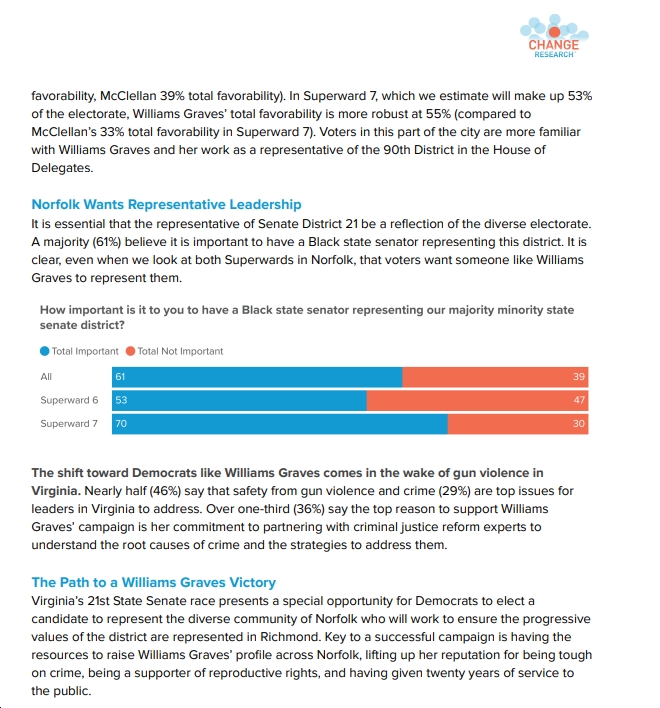 One of far-right VA Sen. Amanda Chase's GOP primary opponents, who's also very right wing, hits her for opposing Youngkin's elections commissioner Susan Beals; pledges loyalty to Youngkin. Not sure why Sturtevant says "a senator" instead of naming Chase. https://bluevirginia.us/2023/02/wednesday-news-hope-fading-as-deaths-in-turkey-syria-quake-pass-11000-dark-brandon-descends-on-bidens-state-of-the-union-address-melts-how-the-house-gop-blew-up-at-sotu-mitt-rom#comment-6110484047

"Republicans Left Bills Without Hearings Because They Don’t Want Constituents To Know Where They Stand " - @ProgressVA https://bluevirginia.us/2023/02/wednesday-news-hope-fading-as-deaths-in-turkey-syria-quake-pass-11000-dark-brandon-descends-on-bidens-state-of-the-union-address-melts-how-the-house-gop-blew-up-at-sotu-mitt-rom#comment-6110462007