What this means; why it matters
The Democratic Party of Virginia (DPVA) decided on June 29, 2012 to reject two formal complaints filed by Gail Gordon Donegan and Ben Tribbett. Each of their complaints related to the procedures DPVA followed at its June 2, 2012 convention to elect DPVA's representatives to the Democratic National Committee (DNC). Because those procedures have been widely condemned as unfair and illegal by many other observers, I decided to seek out the opinion of one of the greatest election experts we have to get his perspective on what happened at DPVA's convention.

So, I sat down during the July 4 holiday week with former President Jimmy Carter at the Carter Center in Atlanta. To assure objectivity, the issues that President Carter and I discussed were presented to him in the context of a hypothetical situation involving political party elections at a convention recently held in the northern region of "Doministan".

Peter Rousselot:  Thanks very much for meeting with me today. As background for our readers, can you tell us a little bit about the work that you and the Carter Center have done regarding election monitoring in various countries around the world?

Jimmy Carter: Rosalynn and I are pleased to have you as our guest here at the Carter Center. As we explain on our website, The Carter Center has been a pioneer in election observation since 1989, monitoring more than 90 elections in Africa, Asia, and Latin America. We developed many of the techniques now common in this field. We analyze election laws, assess voter education and registration, and evaluate fairness in campaigns. 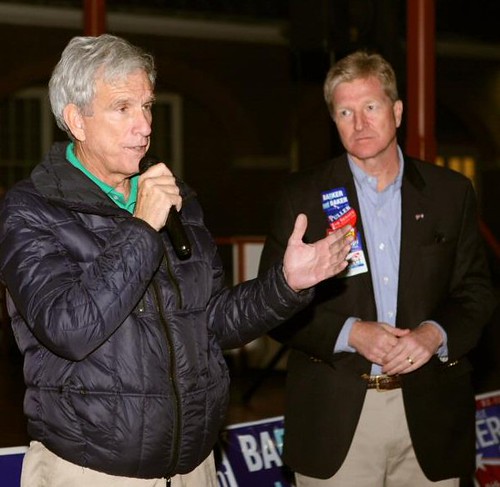 Six keys to a devastating defeat
Introduction
On November 8, 2011, Virginia Democrats lost control of the Virginia State Senate. Their numbers will drop from 22 to 20 (out of 40), allowing Republican Lieutenant Governor Bill Bolling to cast the deciding vote in the case of ties. Moreover, Virginia Democrats lost a lot more ground in the Virginia House of Delegates (HOD), where their numbers will drop from 39 to no more than 33, and perhaps to as few as 30 (out of 100). This means that HOD Republicans will have a majority of 2/3rds or more.

These losses cannot be explained away as the result of "unique local circumstances", election cycles, the Tea Party, the "Republican money machine", or President Obama's current poll numbers. To the contrary, these losses were caused by a series of very avoidable strategic mistakes that certain Virginia Democratic leaders made.

One year ago, because of my concerns about the defeats Virginia Democrats suffered in 2010 and 2009, I ran for Chair of the Democratic Party of Virginia (DPVA). I am not interested in running again for that job, but I am much more concerned about the state of the Democratic Party in Virginia today than I was one year ago. In order to help us get to where we need to be, I present this analysis of what has gone wrong and what should be done to fix it.

The biggest strategic mistakes Virginia Democratic leaders made in 2011 were their adoption of a flawed, hyper-partisan Senate redistricting plan combined with very poor candidate recruitment for both the Senate and HOD.

Why I Support Areizaga-Soto for Virginia State Senate

Several months ago, a number of people came to me and asked me to run for this nomination myself. In declining to do that, I stated that the most important factor in my deciding who I would support would be which Democratic candidate held out the most promise to change the way in which the Virginia State Democratic leadership operates.

Recent examples of terribly flawed decisions by the Virginia State Democratic leadership include:

--dropping the ball on the Cucinnelli/McDonnell abortion clinic restriction legislation

One highly qualified candidate for the Democratic nomination in Senate District 31 stood up to the current Senate Democratic leadership and said, "I'm running despite your opposition to my candidacy." That candidate is Jaime Areizaga-Soto.

Jaime's courage in taking this stand convinced me that he is the only candidate for this seat who will be able to work with the current Senate Democratic leadership where appropriate, but also stand up to them where necessary.

That's why I'm supporting Jaime for this  nomination.

Now that VA Senate Dems have failed to adopt the right political strategy by getting out front early and often supporting non-partisan redistricting, I've been asking myself how I would exploit this gift if I were Bob McDonnell.

I find it very hard to believe that Bill Bolling's email was sent out without coordinating its content with McDonnell. So, I believe that what McDonnell is going to do now is to pursue some variation of the Bolling strategy.