In a front cover story in the latest issue of the Fairfax County Chronicle, Connolly, Fimian to Square Off Again, both candidates outline their positions on improving transportation in Northern Virginia.  Gerry Connolly points out his record of securing funding for some of the area's biggest projects, such as completion of the Fairfax County Parkway and rail to Dulles.

Keith Fimian has a plan that would be interesting if it weren't so dangerous:  eliminate the shoulders which are used for break-downs and for first responders to get to the scene of an accident:

If you go to California, the 405 and the 5 have no shoulder... I would use every available inch of space to make a lane and handle the problem that way.

If you've driven in Los Angeles during rush hour, you know how well that works.  Fimian's solution of installing electronic signs to warn drivers of upcoming traffic problems is a sorry excuse that would do little to address the safety issue.

The practice of eliminating the shoulder is "an unfortunate recent experience" that is opposed by law enforcement.  The International Association of Chiefs of Police published the dangers in a recent report:

frankoanderson - July 1, 2010 2
In the restoration of rights letter from Secretary of the Commonwealth Janet Polarek, one sentence stood out:

Governor McDonnell and I extend our congratulations to you for this achievement and welcome your full and enthusiastic participation in your locality, the Commonwealth of Virginia and the United States.

Since I believe restoration of rights should be automatic, I don't consider it an achievement.  Instead, I congratulate Governor McDonnell for taking steps in the right direction.  As Governor, McDonnell has already outperformed his Democratic predecessor Tim Kaine on this issue (with the exception of the sheer number of people restored, which the administration could easily surpass by 2013).  He has shortened waiting periods to apply and re-apply, he has processed applications in less than sixty days, and it looks like he has ended Kaine's practice of denying people just for having traffic tickets.

At long last, my right to vote has been restored With trembling hands, I opened the letter that came in the mail today from the Secretary of the Commonwealth.  The moment I've been waiting for has arrived.

The fight, of course, is not over and will not be over until every free citizen of Virginia has the right to vote.  In the meantime, now that I'm allowed to, I plan to become a notary public so I can help others complete the Application for Restoration of Rights.

I'm about to drive to the Fairfax County Board of Elections to register to vote, but first I'd like to thank some of the people who have been advocating on my behalf, and people who have been fighting for voting rights for all Virginians.  I don't have time to list everyone, so this list is by no means complete:

“You Can Feel it on the Ground”

We have another opportunity to help pick up a seat in the General Assembly in a special election.  Democrats in Fairfax County were instrumental in the victories of Senator Dave Marsden and Delegate Eileen Filler-Corn (who won by just 37 votes).  This time, we're taking a road trip!

Kai Degner is the Mayor of Harrisonburg and a Young Democrat.  He's running for an open Delegate seat in the 26th District.  The election is Tuesday, June 15.  We have a real opportunity here because:
-Kai is a great candidate who really knows the issues in his district
-Kai has out-raised his Republican opponent
-Democratic volunteers from across the state are fired up!  "You can feel it on the ground," says Fairfax County Democratic Committee Executive Director Mike Burns.
-Kai is running against both a Republican and a Tea Party candidate, so he has a better chance to win a plurality of votes in a three-way race.

Click here if you'd like to reserve a spot on the bus from Fairfax County to Harrisonburg.  Click here if you would like to volunteer in other ways or on days other than Saturday.  The bus leaves from Falls Church on Saturday at 9am.  We hope to see you this Saturday!

Wheels Coming Off the Fimian Campaign 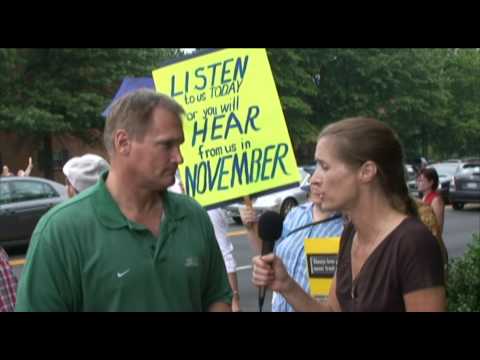 I could tell that the Fimian campaign was falling apart Tuesday, when they released a video in which Keith addresses Herrity Misrepresentation #1, directly calling his opponent a liar.  The "l" word is not often used by primary candidates, so this shows desperation on their part.

Yesterday we had the devastating  revelation, first posted on Not Larry Sabato, that Fimian got to where he is by screwing someone else out of their business.  Not good for the candidate who says he wants to bring a "business tested approach to Congress."

Here's what I'm wondering: what can the Fimian campaign follow "Setting the Record Straight Part 1" with? It's obviously implied that there's a Part 2.  If today's story is true, then Fimian's only choice would be to ignore it and hit back with something else to distract from the issue and avoid a feeding frenzy.  If it's not true, then he still remains on the defensive in the final days before the primary. If Republican voters hear about this, then I think that supposed 13-point lead will vanish pretty quickly.

I hope that Mark Plotkin will ask some tough questions of these guys tomorrow on WTOP radio.

Will I Have Reason to Thank Gov. McDonnell? 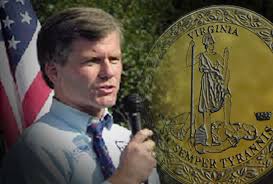 We learned last week that the McDonnell administration is changing its policies on restoration of rights for nonviolent ex-felons like myself. As some readers here are aware, my application was denied in 2008 by Gov. Kaine on the grounds that I had traffic tickets.  But thanks to the new policy, I am able to reapply now instead of waiting until this fall.

Yesterday, I drove to Richmond to hand-deliver my application to Micah Womack, Restoration of Rights Director at the Secretary of the Commonwealth's office. He looked at my application, which was accompanied by a letter (not an essay) and supporting documents, and said that "everything appears to be in order."  I asked him about the traffic ticket issue and he told me they are no longer using tickets as a reason to deny people, although they do look at the DMV records.

I'm in a "wait and see" mode right now.  If they process the application in 60 days, as they said they would, and if my rights are actually restored, then I will have reason to thank Governor McDonnell for taking steps in the right direction (although I disagree with the process of having to petition the Governor in the first place). However, all of their policy announcements with regard to rights restoration would be meaningless if they found a petty reason to deny me again.

This brings up another question. Now that traffic tickets are no longer an impediment to rights restoration, will those who agreed with the former policy (including at least one progressive blogger) still insist that I shouldn't have my rights restored - even though I haven't had a ticket since Oct. '08?