So, is 5th CD Republican nominee Robert Hurt proud to be joining the likes of crazy Sharron Angle on this?

"By signing our pledge, Hurt has taken a leadership position in calling for the de-funding of ObamaCare as the first necessary step to fully repealing and replacing this unconstitutional, job-killing, fiscal train wreck. Americans and Virginians would have a friend in Congress with Robert."

Sooo...is Hurt really advocating putting seniors back in the "donut hole," restoring "rescissions" of coverage and denial of coverage for "pre-existing conditions," kicking children, putting back lifetime and annual limits on coverage, kicking "adult children" under the age of 26 off their parents' health insurance, and ditching tax credits to small businesses to help make covering their employees more affordable? Is that really what Robert Hurt is advocating for residents of the 5th CD?  Unfortunately, he really is.  That's one good reason why, this coming November, 5th CD residents are likely to pick Rep. Tom Perriello instead. Go Tom!

So Much for the Change of Government Resolution?

Is the ridiculous Arlington County "change of government" resolution officially dead (e.g., off the November ballot)? It sure looks like it.

With approximately 250 pages to go during their "first pass" through the 761 petition sheets submitted, county election personnel say they've have counted 8,123 valid signatures. A total of 14,350 valid signatures are needed.

A "second pass" will be conducted to count signatures that could not be readily verified during the first go-round. However, if current trends hold, that process will most likely not yield enough signatures for the petition to pass.

The "rejection rate" for batches that have been fully processed is around 19 percent, according to a county source. At that rate, the petition will fall more than 1,000 signatures short.

That's got to be particularly painful to this initiative's proponents when you consider that "more than $40,000 of union money" was expended on it. Oh well, it's only money I guess. Heh.

UPDATE: You can keep track of the results here.

GOP Continues to Be The Party of George W. Bush

By all means, if you think George W. Bush was a great president, then vote Republican this November. If not, then don't. Because today's Republican Party is in no way, shape, or form different from the Party of George W. Bush, Dick Cheney, Tom DeLay, and that whole crazy crowd.

P.S. And I challenge you to "refudiate" any of that. Heh.

VoteVets on the High National Security and Economic Cost of “Fuel”

Even if you're a hard-hearted soul who doesn't care whether or note we trash the planet, you should certainly care about the economic and national security costs of our "addiction" to oil. And remember, oil is traded in a world market, so it doesn't matter if we directly import from crazy Ahmedinejad; every time we fill up our vehicles, it's another "fungible" drop consumed, and some of that money goes to Iran's nuclear weapons program, Al Qaeda, the Bin Laden family, etc. Think about that for a minute, then call your Senators and tell them to vote for comprehensive, clean energy and climate legislation ASAP!

Click on the image to "embiggen."  In short, according to Gallup, Barack Obama's approval ratings are almost exactly tracking Ronald Reagan's approval ratings at the same points in their presidencies. Note that Reagan was faced with a nasty recession, as is Obama. Also note that Republicans lost a net of 27 seats to the Democrats in the 1982 midterm elections. I'd be very happy if Democrats only lost 27 seats this time around. Finally, I'd point out that Ronald Reagan's approval ratings rebounded, along with the economy, and he was reelected in a landslide in 1984. Past as prologue?

LL wouldn't normally bore his readers with tales of spokesperson shenanigans. But Fenty is facing the very real possibility that in two months he'll lose the Democratic primary to D.C. Council Chairman Vincent Gray. And many of his troubles involve what political operatives call "atmospherics"-the very stuff a PR professional is supposed to manage.

In the Fenty administration, though, the paid PR professionals are AWOL. Instead, the mayor has let his very own Samwise Gamgee, D.C. Attorney General Peter Nickles, become the de facto spokesman. "I cringe every time he opens his fucking mouth," said one Fenty pal, who spoke on condition of anonymity for, well, obvious reasons.


Look, I know that Mo - who I named the second most significant Democratic campaign person of the past decade - has been on a bit of a rough streak recently, with losses by his clients Hillary Clinton in 2008, Terry McAuliffe, Creigh Deeds and Jody Wagner in 2009. On the other hand, Mo won some big ones - Mark Warner '01, Tim Kaine '05 - a few years back, and is due for a win at this point [UPDATE: apparently, Mo also helped  elect Tom Udall to the Senate in 2008 as well].  Of course, it's never easy unseating an incumbent, but Adrian Fenty has alienated an awful lot of people with his arrogant, aloof leadership style. And now, he's running what Loose Lips describes as an utterly incompetent campaign for reelection.  I don't know about you, but I'm putting my money on a big "W" for Mo in this one!

Steve Shannon: “This is not the time to shake a fist at Washington and... 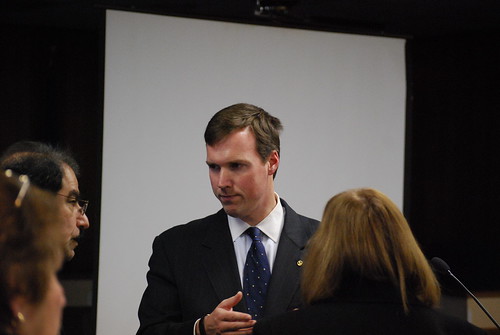 In this morning's Washington Post, former Delegate and Democratic Attorney General nominee, Steve Shannon, has a powerfully argued op-ed on an important topic: "How to provide more help for unemployed Virginians". Here's an excerpt:

In the meantime, Gov. McDonnell should immediately make it clear to Virginia's congressional delegation and to the leaders of his party that he favors extending long-term unemployment benefits. As this newspaper pointed out in its July 13 editorial, "Unemployment benefits, which are most apt to be immediately plowed back into the economy, are about the most stimulative form of spending. Extending them is both fiscally sensible and morally decent."

The question is, is Bob McDonnell really "Bob's for Jobs," as he said in the 2009 gubernatorial campaign that he would be if elected?  So far, except for lavishing corporate welfare on his preferred industries - wine, oil, film, military-industrial complex - in return for a handful of jobs (at best), he sure hasn't shown it. How about, as Steve Shannon argues, first "find[ing] a way to say yes to helping citizens who so need our help?"

Having spoken to Mark Warner extensively about clean energy and climate issues, there's absolutely no doubt in my mind that he "gets it," whether we're talking about the environmental, national security, business opportunity, or economic aspects of the issue.  Also, there's very little question in my mind that, in the end, Warner will vote the right way on clean energy and environmental issues. What I don't necessarily expect is for Warner to be outspoken publicly on these topics. That's why I'm so pleasantly surprised to see Sen. Warner's signature on this superb letter from the "Freshmen Democratic Class" - to Sen. Reid. The key points of the letter:

*The "transition to a clean energy economy...is an economic, national security and environmental priority." Exactly.

*We need a "comprehensive solution that includes making polluters pay through a price on greenhouse gas emissions." Yes!

*Legislation should provide "targeted incentives for investments in energy efficiency throughout the American economy."  As I've said a gazillion times, energy efficiency is, by far and away, the lowest of low-hanging fruits - also the "biggest bang for the buck" - when it comes to energy. For more on this subject, see David Goldstein's book, "Invisible Energy", which explainsthat "efficiency could produce 30 percent of the energy America would otherwise need by 2030," with an "economic stimulus [of]...several trillions of dollars per year." This one is the no-brainer of all no-brainers, frankly.

*We need a "federal renewable electricity standard (RES) that results in a meaningful increase in renewable energy production."  This is good, although the "devil's in the details."  For instance, the RES shouldn't include things that aren't really "renewable energy," and it shouldn't include any form of energy that does more harm than good. That should be obvious, but sometimes it isn't.

*We should invest in "expanded use of rail transportation" as well as "electric vehicles." Combined with a strong RES, this should result in a sharp decrease in oil consumption, carbon emissions, the U.S. trade deficit, and the billions of dollars that currently flow to countries (and non-state actors) that aren't our friends.

Again, thanks to Sen. Warner and the other freshmen Senators for signing this letter. Now, let's get it done!

P.S. It would be great to see Jim Webb signing letters like this one!

Thursday News: “Coronavirus lays bare all the pathologies of the Trump administration”; “Trump has...