Ken Cuccinelli proves that he's back in the Stone Age, or maybe the "Father Knows Best" 1950s, when homosexuality actually was considered a "a detriment to our culture." Of course, Cuccinelli has no evidence to back this up.  It's also ironic that he makes this claim, as his pal "Sideshow" Bob Marshall argues the opposite, that "gay individuals seem to have more income, to attend more cultural events, to take more vacations than the rest of us." Last I checked, having more income and attending more cultural events didn't make someone a "detriment to our culture," but since when did these haters care about facts or logic?  Take the "debate" on health care reform, for instance, where people on Cooch's team have been screaming about phony "death panels" and "government takeovers of health care" and other falsehoods.  The only questions are, why does anyone listen to these people, and of course why does anyone in their right mind vote for them?

The right-wing noise machine is in high gear, spewing out "hyperbolic rhetoric" and "outright falsehoods." In other words, just another day at the office for Glenn, Sean, etc.

Obama: “Time for Action on Financial Reform for the Economy”

The full transcript is here. Here's an excerpt:

...these reforms include a new Consumer Financial Protection Agency to prevent predatory loan practices and other abuses to ensure that consumers get clear information about loans and other financial products before they sign on the dotted line.  Because this financial crisis wasn't just the result of decisions made by large financial firms; it was also the result of decisions made by ordinary Americans to open credit cards and take on mortgages.  And while there were many who took out loans they knew they couldn't afford, there were also millions of people who signed contracts they didn't fully understand offered by lenders who didn't always tell the truth.

This is in part because the job of protecting consumers is spread across seven different federal agencies, none of which has the interests of ordinary Americans as its principal concern.  This diffusion of responsibility has made it easier for credit card companies to lure customers with attractive offers then punish them in the fine print; for payday lenders and others who charge outrageous interest to operate without much oversight; and for mortgage brokers to entice homebuyers with low initial rates only to trap them with ballooning payments down the line.

Beginning today, Catholics United will run a television ad that will set the record straight about false allegations of federal abortion funding in the Senate health care bill.  The purpose of the 30-second spot is remind legislators, like Rep. Tom Perriello, and his constituents that taxpayer funding of abortion is expressly prohibited in pending health care legislation, and that the bill has earned the support of a broad swath of the Catholic community.  The ad will run in saturation in the Richmond, Roanoke and Lynchburg media markets.

The following comment was left on the Bilerico Project blog, in response to a post by Michael Hamar on efforts by Equality Virginia "to keep the pressure on Virginia GOP Governor Bob McDonnell and the gay haters in the Virginia General Assembly."  The commenter is from Lawrenceville, Georgia. I find the comment, which Michael Hamar pointed out to me, interesting on two counts: 1) Cooch's office actually defending Virginia's antiquated, bizarre, unconstitutional, normally unenforced anti-"sodomy" laws; and 2) the rude manner in which the caller is treated by Cooch's office. The embarrassment to Virginia continues embarrassing.

I also took this chance to complain to the Attorney General concerning a practice of some of Virginia's local law-enforcement jurisdictions, where they continue to make arrests for violations of Virginia's sodomy laws, imprisoning men for violations of those laws, then having the judges dismiss those charges when the men are brought to trial - not at arraignment, but at actual trial. I reminded the Virginia AG's Office of Lawrence v. Texas, and how the Supreme Court had issued a decision which negated all sodomy laws, nationwide.

The AG's Office informed me Virginia has not repealed their sodomy laws, so that arrest under those laws was still justified, and the process in place was correct: local jurisdictions follow the laws on the books, a trial court dismisses those charges to conform with federal court decisions; that was "how the system works."

"Y'all don't even live here, so it really doesn't affect you. Goodbye."


I just hope that Cooch's job doesn't include promoting Virginia tourism, certainly not with the slogan, "Virginia is for lovers!" Ha. The supporters for Health Care Reform far outnumbered the one hundred or so people who were outside the Patriot Center protesting.  Many of their signs were the usual misconceptions and lies about Health Care and what America needs to do for its citizens.  It was business as usual with protestors sure that Health Care Reform will kill granny, will be given to illegal immigrants and will involve a government take over.  What the signs didn't say was that Health Care Reform and the bill to be voted on this weekend involves a commonsense bill that takes into account both the ideas from Democrats AND from Republicans.  Rather than insurance companies or the government controlling our health care, control will be given back to the American people.

1. Ending the worst practices of insurance companies.  This will be a "Patient Bill of Rights on Steroids."  Thousands will have the right to buy health are.  Denying coverage to kids with preexisting conditions will be no more.  Insurance companies dropping coverage when a patient gets ill, will cease.  Young students will have the right to stay under their parent's health care until the age of 26 which will provide them with some security.

2.  Small business owners will get the same choices as members of Congress do, in choosing health care.  They will receive tax credits.  This will be paid for by the elimination of fraud.  It will be paid for up front unlike the past administration who passed a prescription bill that was never paid for ad resulted in a huge addition to the federal deficit.  President Obama promised young people that a credit card wouldn't be taken out in their name to pay for Health Care Reform.

3.  The cost of health care will go down.  Individuals cost will decrease from 14-20%.  Employees costs would go down $3,000 per employee.  Who knows?  Maybe that might result in a raise which would be a totally new concept for so many employees who have forgotten what it's like to get a raise in their paycheck.  Health Care Reform will also reduce the federal deficit whereas the so called fiscal conservatives raised the deficit by 1 trillion dollars.  Now their mantra is we can't afford this.  This was said about both Social Security
AND Medicare.

President Obama has the courage of his convictions to not care what the polls say.  They don't matter.  We need do this for Americans because it's the right thing to do!!!!!!!

Thanks to all of you who came out today and showed your support for our President!!!!  The crowd and support are still very much for President Obama.. God Bless America and let's hope this weekend our legislators do what's right for our citizens.

lowkell - March 19, 2010 1
Thanks to Mary Lee Cerillo for these excellent photos of health reform supporters from this morning's rally at George Mason University. 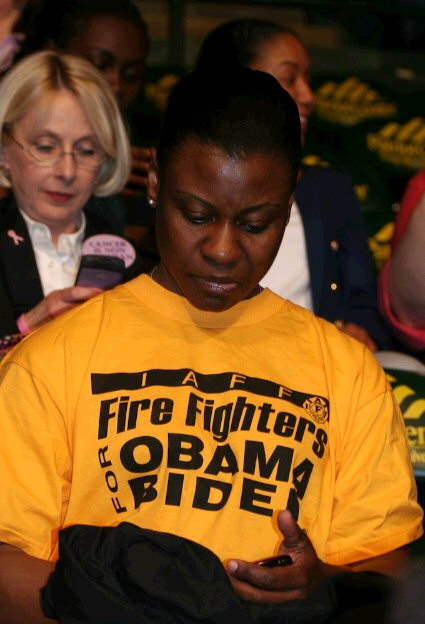 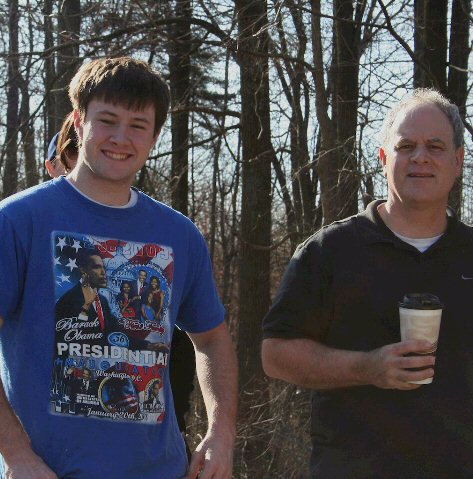