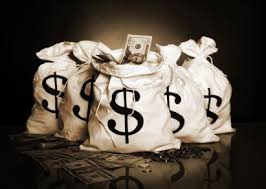 That's the title of this column by Nicholas Kristof. He begins by explaining how he came to understand "came to understand how much sense the Tea Party caucus makes." Of course, if Republicans really believe their logic that the wealthy are the ones who create jobs, they really don't go far enough. So in this column he carries out their logic to its logical end, in a series of jabs that are, shall we say, not exactly how the Republicans and those financing them (Koch, Bors., anyone?) would want to be portrayed.

The title comes from the first such offering, about which he writes

Republicans won't extend unemployment benefits, even in the worst downturn in 70 years, because that makes people lazy about finding jobs. They're right: We should be creating incentives for Americans to rise up the food chain by sending hefty checks to every new billionaire. This could be paid for with a tax surcharge on regular working folks. It's the least we can do.

Oh, never mind! Silly me! The banks are already doing that.

Please keep reading -   of course I mean the Kristof, but I have a few more words below the fold.

“The Job’s Not Done Tour” Comes to Virginia SPRINGFIELD, VA - A bus tour highlighting the potential to create good American jobs by passing comprehensive clean energy and climate change legislation in the U.S. Senate stopped by the Re/Build Warehouse in Springfield, Virginia, today to urge Senators Warner and Webb to support action on comprehensive legislation that will create and save millions of American, clean energy jobs, including up to 50,000 jobs in Virginia.

"Nearly 1 out of 10 Americans are still out of work and we need action now to create and preserve millions of jobs across the country," said Lindsay Patterson, President of USW Local 404 of Philadelphia. "We have a solution right at our fingertips - we can create good jobs here in Virginia with clean energy."

Re/Build Warehouse was formed in 2008 to receive and sell reclaimed building material donations in order to provide funds to train unemployed and underemployed unskilled workers for "green collar" jobs and to educate the community in affordable ways to live sustainably.