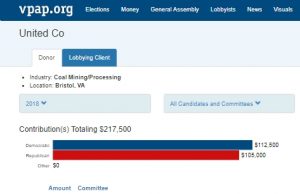 Coal-Barons-Turned-Gambling-Promoters Throw $$$ at Virginia General Assembly to Ram Through Economically...

lowkell - January 12, 2019 1
I was chatting with a Richmond-based political source of mine yesterday about the following bill by Israel O'Quinn (co-patroned by Daniel Marshall and John...

Blue Virginia - October 2, 2018 1
From the Democratic Party of Virginia: As Corey Stewart Triples Down on Attacking Danville, Denver Riggleman Refuses to Defend the Fifth District Richmond, VA – In... 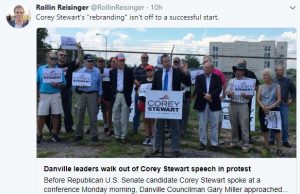 lowkell - October 2, 2018 2
See below for video of the remarks by Corey Stewart yesterday that resulted in "Danville officials walk out of a speech by senatorial candidate Corey...

lowkell - July 28, 2018 3
by Lowell Here are a few national and Virginia news headlines, political and otherwise, for Saturday, July 28. Trump and Son at Legal Risk If...

Will Denver Stick Up For Danville? GOP Nominee Riggleman Silent After...

Blue Virginia - July 24, 2018 7
From the Democratic Party of Virginia (DPVA) Will Denver stick up for Danville? GOP nominee Riggleman silent after Corey Stewart disparages city in heart of... As we get into the intense final week before the election, a quick interesting story. I'm in Danville this week helping Rep. Tom Perriello's campaign on behalf of the NWF Action Fund, which has endorsed Tom. Before heading into the office this morning, I wanted to do some research on the area so I'd be better prepared to talk to voters. I found this on Danville's Wikipedia page:

On March 2, 1911, Danville Police Chief R. E. Morris, who had been elected to three two-year terms and was running for a fourth term, was arrested as an escaped convicted murderer. He admitted that he was really Edgar Stribling of Harris County, Georgia, and had been on the run for thirteen years.

Who knew Danville had its own version of Mad Men's Don Draper?

Later in the New York Times report (PDF) on the arrest, it mentions friends of the murdered man had learned of Stribling's whereabouts and "raised funds necessary to take Stribling back to prison." I don't doubt the good old days were just swell, but sometimes you hear things like this and are glad to be alive in 2010. Can you imagine if you found your son's murderer and the police said, "Great! Let us know when you've bought two round-trip plane tickets for us and a one-way ticket back for the killer."