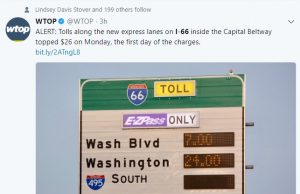 lowkell - December 5, 2017 4
The advent of I-66 variable-price tolling (note that this is ONLY for solo drivers, who previously couldn't legally use the road during rush hour)...

Blue Virginia - November 3, 2017 0
By John Cannon On May 24th, Delegate Jim LeMunyon (R-HD67) wrote an article for a local news site to let his constituents know what he’d...

lowkell - May 8, 2017 5
On April 17, I sent Blue Virginia interview questions to the three Democratic candidates running for the 67th House of Delegates district (Chantilly/Centreville) seat...

Risheq Will Fight Racism in Virginia

Hannah Risheq - May 7, 2017 0
Today a video (see below) started circulating of a woman, in the Reston, VA Trader Joes, spouting hate and unfiltered racist comments to the Muslim...

Jim LeMunyon Mad at Being Called Out for Extremist Tea Party... Apparently, Del. Jim LeMunyon (Tea Party) really didn't like being called out for his extremism and Tea Party ties by Democratic challenger Eric Clingan. Check out LeMunyon's highly defensive email, below the "fold," which tries valiantly - but  completely fails - to claim that his proposed legislation to "tea up the Constitution" is actually no such thing, that he's really not supported by the Tea Party, etc. It's rather amusing...in a Mad Hatter-ish sorta way, that is (note: click on the image to "embiggen"). :)

- There are two political action committees (PACs) in Virginia affiliated with the Tea Party. Public records show that I have not received any donations from them;

- An organization called Middle Resolution contributed to my 2009 campaign. Their donations (considerably less than the figure claimed by Mr. Clingan) have been a matter of public record for more than two years. Mr. Clingan calls them the "Tea Party" PAC. This is false. Middle Resolution is a group of private citizens in Virginia who are active in politics, but not affiliated with any organization. They did not "put me up" to introducing any legislation, but I was happy to have their support for H.J. 542 after it was introduced. I authored H.J. 542 at the request of House Speaker Bill Howell;

Well, that didn't take long. Just a day after Democratic House of Delegates nominee Eric Clingan (67th district) called out Tea Partier Jim LeMunyon (at an Arab-American dinner, which LeMunyon skipped, but at which 10th CD Republican Chair Howie Lind appeared) for his extremist views and ties, including to the far-far-right-wing "Middle Resolution PAC" (see here for a lot more on this subject), guess what happened? That's right, Tea Partier LeMunyon returned $50,000 he'd received from the "Middle Resolution PAC." What's that all about? Coincidence or cause-and-effect? I encourage reporters to ask LeMunyon and see what he has to say. While they're at it, they also might want to ask why LeMunyon's tied up with a group that's closely linked to the hard-right-wing ALEC (see ALEC Exposed: A Nationwide Blueprint for the Rightwing Takeover), and why he's pushing one of their top priorities, the dangerous "REPEAL" amendment. It should be fascinating to hear his answers...

If you missed it, this morning's Oakton Patch had a fascinating article, entitled "Clingan Accuses LeMunyon of Serving Tea Party Interest Over His Constituents." That would be Eric Clingan, the Democratic candidate running against Republican incumbent Del. Jim LeMunyon in the 67th House of Delegates district. As the Patch article points out, correctly, LeMunyon received a $50,000 loan from something called the "Middle Resolution PAC." As you can see from the information below, this PAC pretends to be middle-of-the-road, but in fact is Tea Party and far-right-wing all the way.

Evidence to back up this charge?

For starters, Jim LeMunyon himself credits the "Middle Resolution PAC" with winning him the 2009 election over Chuck Caputo in the McDonnell wipeout of Creigh Deeds:

"Our 2009 Virginia House race had no funding for television until Middle Resolution decided to become a partner in the campaign, and pay for substantially all of our TV advertising in October. We won by about 1100 votes out of more than 20,000. Did the television advertising help swing 1100 votes our way? Absolutely." Del. Jim LeMunyon

Next, read the following from the Patch article:

The [Middle Resolution] PAC supported two pieces of legislation in 2011: the Repeal Amendment, which LeMunyon introduced in the House, and the Secret Ballot, which LeMunyon voted in favor of. Both bills passed the House, but died before reaching the Senate floor.

The Repeal Amendment calls for a constitutional amendment that would allow states to repeal any federal law or regulation. The Secret Ballot legislation advocates allowing workers in a labor organization to vote by secret ballot.

Clingan said not only did Middle Resolution "buy" the Repeal Amendment legislation through their 2009 contributions, but the legislation itself "opens the door to attack every piece of federal legislation ever written. As a constitutional lawyer, it is a rather far-reaching, reckless approach to government."

Clingan is absolutely correct; what LeMunyon and his far-right-wing supporters are pushing here is a truly dangerous, "far-reaching, reckless approach to government." Essentially, it allows states to nullify federal laws. Didn't we settle this question in the Civil War? Apparently not, in Jim LeMunyon's opinion.

The only question is, do Jim LeMunyon's constituents know that their delegate is a Ken Kookinelli, Rick Perry-style extremist all the way, not in the least bit a moderate or middle-of-the-road representative for his strong Obama district? Perhaps they don't know it yet, but if Eric Clingan does his job right, they certainly should be aware of it by election day in two months.