Sunday News: “America’s Political Mood Is Now the ‘Most Liberal Ever...

lowkell - June 9, 2019 7
by Lowell Here are a few national and Virginia news headlines, political and otherwise, for Sunday, June 9.  Virginia polls open in under 48 hours…when...

Interview with Sam Bleicher, Author of “The Plot to Cool the...

lowkell - May 11, 2019 0
I had a chance to sit down Thursday with Sam Bleicher, an adjunct professor of law at Georgetown University in Washington, D.C., who from...

Over Three Years After Publicly Promising He’d “Do More on [the...

The Climate Crisis—We Must Act Now.

Bert Berlin - December 19, 2018 0
Every time somebody posts a photo of some sweet child or grandchild on social media, I feel terribly sad. These innocent young people will...

Dave Brat is Fiddling While the World Gets Hotter

Bert Berlin - October 8, 2018 0
"The world stands on the brink of failure when it comes to holding global warming to moderate levels, and nations will have to take... Things don't look good for India. But the United States doesn't get off easy, either. If you look at exposed assets rather than total population, then Miami, New York-Newark, New Orleans and Virginia Beach all climb higher on the list, with $7 trillion in assets vulnerable to severe coastal flooding by 2070. [...]

Take Miami. A three-foot sea-level rise, experts have noted, would likely put all of Miami Beach underwater and turn downtown Miami into an island, channeled off from the rest of Florida. Yet the state isn't doing all that much to prepare for this eventuality. Instead, it's racing to subsidize new developments along the coasts, through state-run insurance and funding for coastal protection. By contrast, cities such as London and Amsterdam are taking more prudent steps to guard against future flooding - and, as the OECD report notes, are likely to cope with sea-level rise better.

That's not an isolated case. In general, the United States has been slow in preparing for rising sea levels. In many cases, we're actively making things worse, as Steve Nash laid out in this excellent article in the New Republic. This is one area in particular where climate-change denial can do a lot of damage - it's awfully hard to prepare for a problem that no one can agree even exists.

So we're not doing climate mitigation, like cutting carbon pollution. And as an event just last month at NASA's Langley Center in Hampton pointed out, we're not doing climate adaptation, either, like coastal restoration & limiting development in areas just above sea level. Basically, if you were consciously trying to leave the worst possible situation for the next generation, you'd be doing exactly what people like Gov. Bob McDonnell are doing now - deny the problem & delay solutions. And note the 2070 date - we're no longer talking about forecast impacts on some future generation, but real changes happening within the lifetimes of the children in your family right now. Amazing that the same people who profess such a concern with our budgetary national debt have no qualms about leaving our kids stuck with a multi-trillion-dollar climate liability.

Can We Outrun the Climate Firestorm We’re Stoking? Is it time to stop talking about the low end of climate change predictions? Until now, I've thought of our climate choices as "mild disruption," "wrenching calamity," and "civilization-threatening catastrophe," depending on how quickly and seriously we act to cut carbon pollution. But reading Jeff Goodell's Rolling Stone article on Australia's grim future, I wonder if our continued inaction is putting that first option in the rear view mirror.

But since that report nearly five years ago, global carbon pollution has continued to rise steadily. And with Washington talking about sticking a new tar sands pipeline in our oil addicted veins, now experts are wondering if we'll act fast enough to avoid the dreaded high emissions scenario: 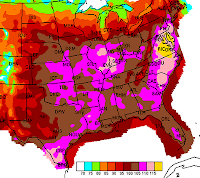 Can I use the term "breaking news" to describe a weather forecast for a sunny day? Yup. That just happened.

Last month, I asked If June Is This Hot, What Will July & August Be Like? Now we have the answer from Jason Samenow of WashingtonPost.com's Capital Weather Gang:

NOAA has upped its peak heat index prediction for D.C. Friday to a stunning, sweltering 116 degrees. Remarkably, it predicts there is a 90 percent chance it will reach at least 110 and a 100 percent chance of at least 105. Earlier today, NOAA was predicting a maximum heat index of 109 Friday.

And poor Richmond, Va.! NOAA projects its heat index will soar to a stifling 118 degrees.