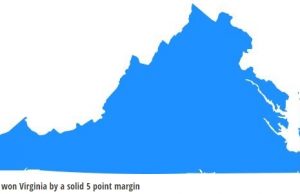 The Aftermath of Virginia’s 2019 Elections: Tracing Virginia’s Movement from a...

Blue Virginia - November 6, 2019 1
by Frank X. O'Leary  Last night in Virginia, there was an earthquake!  The ground shifted and a “Purple” state went decisively BLUE!  This has been...

lowkell - May 15, 2019 2
The following is by former Arlington County Treasurer Frank X. O'Leary, who has been doing these predictions for years now. Note that about a...

lowkell - November 2, 2017 6
Frank O'Leary, who served as Arlington County Treasurer for over three decades (1983-2014), also was well known for his voter turnout and electoral predictions....

lowkell - May 4, 2016 2
Good news for those of us who support the real Democrat and progressive in this race, Erik Guthsall. Ferguson, O'Leary Endorse Gutshall; Winning Endorsement Battle...

At tonight's Arlington County Democratic Committee meeting, county Treasurer Frank O'Leary announced for reelection. O'Leary has done a superb job in this position since 1982, among other things lowering the County's delinquency rate from over 9% then to just 0.5% or so now. O'Leary has won many awards and instituted numerous innovations. In sum, O'Leary has been a superb Arlington County Treasurer, and richly deserves another term. I strongly endorse him for reelection!

UPDATE: I've already strongly endorsed Arlington Commissioner of Revenue Ingrid Morroy for reelection, but see the "flip" for video of her speech at tonight's ACDC meeting. Go Ingrid, you rock!