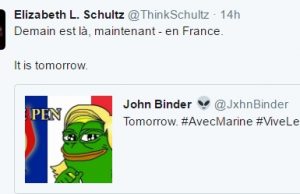 A Siegel - April 24, 2017 14
Less than a month ago, the headline read Fairfax County unites against hate.  At least one FCPS School Board member doesn't seem to have...

When you heard the terrible news from Arizona, were you completely surprised? Or were you, at some level, expecting something like this atrocity to happen?

Put me in the latter category. I've had a sick feeling in the pit of my stomach ever since the final stages of the 2008 campaign.

So begins Nobel Laureate Economist Paul Krugman in his op ed this morning, Climate of Hate

Why mention his award? Because as an economist he is used to examining the data and seeing the patterns. And on this the patterns are crystal clear.

Read his column.  It is as well written as usual, which makes it hard to excerpt.

I will explore aspects of it, and offer thoughts of my own.