Conservatism in the Age of Trump (My latest challenge to the...

5oclockshadow - April 22, 2018 3
For political extremism to become policy, a hyperbolic extreme must present itself in the marketplace of ideas. These lightning rods are necessary to allow... 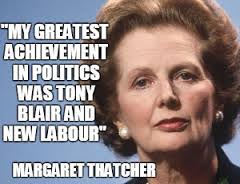 Before You Blame Bernie…

5oclockshadow - September 24, 2017 11
by Josh Chernila Loyal Democratic liberals have been broken-hearted and enraged by recent claims, spurred on by Hillary Clinton, that somehow Bernie Sanders gave the...

Why Conservatism is the Death of Conscience, Democracy, Reason, and Language

5oclockshadow - February 5, 2017 3
I enjoy a healthy friendship with conservative thought leader and former Virginia Republican party spokesperson, Shaun Kenney.  I disagree with him on almost everything,...

With The Failure of Detente, Democrats Must Finally Join the War...

Andy Schmookler - March 2, 2016 6
Appearing in newspapers in conservative VA-06. It is now 60 years that I’ve been following American politics closely. Long enough to get surprised when the...

Two Sides of the Same Coin: Liberalism & Means to an...

While liberals, conservatives, and libertarians, Democrats and Republicans argue amongst themselves about which way the United States should head, the point is often lost that every side is arguing from a different side of the same coin, the coin of liberalism. Even though sometimes it appears like "each side" is a world away from the other, the vast preponderance of disputants share comparable liberal values, values like the sacredness of personal freedom, the sanctity of  the freedom of thought and expression, and the right to the pursuit of happiness. Where each side usually differs is what means we should use in order to achieve the ends of a society based upon the principles of liberalism. In these strictly partisan times, it might be useful to point out that despite all of our supposed differences, the base from which most of us argue consists of the same liberal framework.

Step into the political sphere, of course, and philosophical differences become accentuated, stretched beyond their rational limits for political ends. It is not certain, however, that politicians consciously exaggerate some of the smaller dissimilarities that politician A, the conservative, and politician B, the liberal, share. The effects however are usually the same: each politician and his or her followers get caught up in the tried and true game of partisan bickering. Can we even imagine a political debate that isn't mired in heated political disputes anymore?

To be clear, my argument is not that there are not real political philosophical differences between the liberal, conservative, or the libertarian. There are philosophical differences among these political camps. The argument I'm making is that these differences are not nearly as profound as many would have us believe. For instance, the liberal does want a more active government that can correct for some of the inequalities and inequities in society. However, the liberal normally doesn't want more government for government's sake just as the libertarian or conservative doesn't. Thus, in many ways it is not a question of liking more government but, in the case of liberals, believing bigger government is a necessarily evil to solve some of society's most pervasive ills.