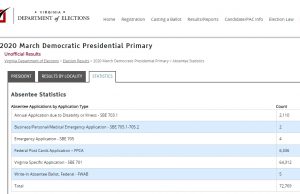 With Virginia’s 2020 Democratic Presidential Primary on Tuesday, Where Are We...

lowkell - February 29, 2020 1
With the Virginia Democratic presidential primary on Tuesday, and with absentee in-person voting ending today, where are we with total absentees so far?  See...

Kellen Squire - July 15, 2019 1
by Kellen Squire Listen- I know it's early. A little under six months until the Presidential primaries are underway; a full year until the Democratic...

Andy Schmookler - March 2, 2019 9
I have really no idea whom I'm going to support in the Democratic primary field. I can't recall the picture being so blurry to...

The Case for Perriello is Stronger than the Washington Post Article...

April Moore - March 22, 2017 16
The Washington Post article that Lowell includes in today’s news summary is quite informative. But in some crucial ways it’s also misleading. The article does a...

Why I withdrew my endorsement of Barbara Favola

Back in April of this year I made an early endorsement of Barbara Favola's candidacy for the Democratic nomination.  I later was forced to reconsider that decision, and now I think it might be of some value to look at the factors that induced me to endorse her and then later withdraw that endorsement.

I made my decision to endorse Favola based on a number of factors.  I gave great weight to the endorsement of retiring state senator Mary Margaret Whipple.  The precise geography of the 31st has shifted due to redistricting, but much of the 31st remains the same as the district that Whipple represented before she announced her decision not to run for re-election.  I have a great deal of respect for Senator Whipple and that certainly influenced my decision.

I was also impressed by Favola's early organization of her campaign.  Organizational skill is something that is often lacking in Democratic campaigns, particularly those below the statewide level.  The Democratic Party of Virginia has not done enough to foster a political culture that creates a group of party members with campaign skills.  Statewide candidates frequently hire consultants from out of state, ignoring local committees.  To me, Favola's early organization, her professional website, and her list of endorsements all pointed to a campaign that was ready to hit the ground running.

Finally, I considered the endorsement by State Senate Majority Leader Dick Saslaw.  Now I am not as vociferous a critic of Saslaw as some on this site are, but neither am I a blind follower of his.  Saslaw has made mistakes, but he is the choice of the Democrats in the State Senate-it's not something I get to vote on directly.  What I would hope for in any potential candidate for the state senate would be someone more to the progressive end of the political spectrum who is nevertheless able to walk into Leader Saslaw's office and persuade him.