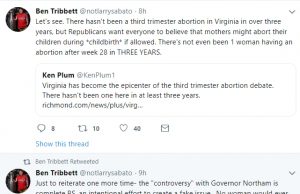 Tuesday News: “Trump is a fraud”; “Democrats’ 2020 presidential contest is...

lowkell - January 29, 2019 0
by Lowell Here are a few national and Virginia news headlines, political and otherwise, for Tuesday, January 29. ﻿ May Rips Up Her Divorce Plan to...

lowkell - January 28, 2019 0
by Lowell Here are a few national and Virginia news headlines, political and otherwise, for Monday, January 28. ﻿ Venezuela crisis: White House 'will respond to... Saying reasonable Americans should stop contributing to all politicians regardless of sanity is self-defeatingly wrong. A friend approvingly posted Schultz's comments to Facebook, saying, "Stop feeding the monster." But if you're reading this, you aren't one of the ones feeding the monsters. Just 150 wealthy people & couples have fed new Tea Party favorite Gov. Rick Perry $37 million and have seen a handsome return for their investment. Now as much as ever, America needs reasonable people to be engaged and reasonable politicians to be supported. Grover Norquist and the Koch brothers are not going to stop injecting huge sums of cash into funding Tea Party insanity. Telling reasonable people to boycott politics is equivalent to calling for only the forces of good to be disarmed.

Finally, refusing to assign blame to Republicans is cynically wrong. Rep. Eric Cantor (R-VA) was the prime mover behind the Tea Party's creation of the voluntary debt ceiling crisis, and Rep. John Boehner (R-OH) & Sen. Mitch McConnell (R-KY) went along with what they knew was bad politics & policy to avoid losing their leadership positions to the Tea Party hordes.

So why isn't Schultz blaming them by name?