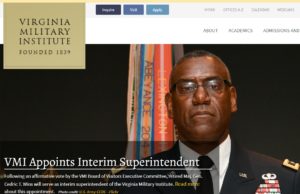 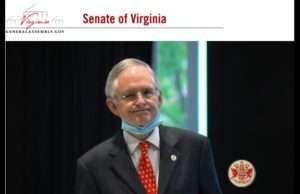 lowkell - November 10, 2020 0
Yesterday, the Virginia General Assembly wrapped up its business for the 2021 Special Session. But before it did, Senate Minority Leader Tommy Norment (R)... 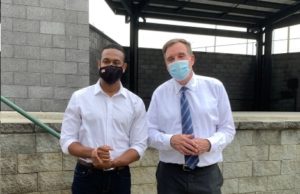 lowkell - October 30, 2020 0
by Lowell Here are a few national and Virginia news headlines, political and otherwise, for Friday, October 30. Remember, if you still have an absentee... 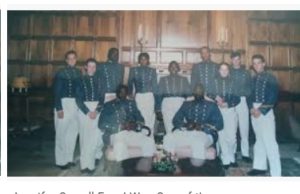 Del. Carroll Foy Statement on VMI’s Adoption of Her Proposals to... 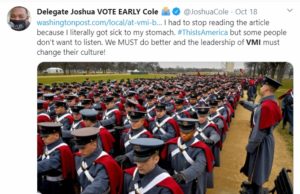 lowkell - October 19, 2020 0
If you haven't read the Washington Post's At VMI, Black cadets endure lynching threats, Klan memories and Confederacy veneration, you really should, as it's...

Which Flag Would That Be, Mr. President?

Dan Sullivan - January 20, 2019 0
Oblivious. More than frightening. If so out of touch about his own base, how horribly can his administration be fumbling complex issues home and...

lowkell - May 17, 2018 0
See below for video of former Secretary of State Rex Tillerson addressing the Virginia Military Institute (VMI) graduating class of 2018 yesterday, and pointedly...

They certainly have done nothing to deliver health care to rural Virginia. Cadet Hoang collapsed during training on Monday, treated at the scene, transported to the school's infirmary, then transferred to the local Carillion Stonewall Jackson Hospital. The question begged: what if millions had been invested in local healthcare infrastructure?

Tragedies like this occur. It is not that the young cadet collapsed during training from what well may have been a congenital condition; it is that the standard of care available in rural Virginia is subpar. At least Lexington has a hospital of sorts. Much of rural Virginia has no immediate facility. There is demand; it is just not operationalized in the marketplace. But this situation draws attention to the fact that even those who have health insurance suffer from the failure to expand Medicaid. You can have the best insurance in the world but if there is no facility in reach, it does not matter. What would have been different if $2.5 billion dollars had provided the incentive to expand service across the state?

Every step in the decision making process during crisis is guided by the conditions extant. What would the response during Hoang's emergency have been if those responding weren't faced with the fact that the closest urgent care facility wasn't an hour away from Lexington in Waynesboro and that the goal for being seen by a physician after triage at the local hospital emergency room in Lexington was something more impressive than 40 minutes; yes, that is from the hospital's website. The young man might have been taken directly to a facility actually staffed and equipped for immediate emergency intervention rather than to the school infirmary.

We will never know. What we do know is that the options for everyone living in Lexington and the rest of rural Virginia would be different and significantly better with the infusion of millions of those billions of dollars locally. But Republicans are dead set against allowing the marketplace to function. And Lexington is far from being as isolated as many localities. Thousands of Virginians are suffering and dying unnecessarily as a direct result of Republican intransigence.

Northam Hasn’t Wavered From the Issues

Honor distinguishes Doctor Ralph Northam's character. It was recognized early on by all with whom he came in contact; chosen by his fellow students at VMI to head the Honor Court: the classmate whose judgment they trusted most. His character is reflected in his campaign staff and his campaign.

Northam's opponent and the RPV have employed the common lowbrow attack strategy. The issues important to the district have never been at the center of the Republican's campaign. His opponent would be critically vulnerable to a negative strategy from the Northam camp. But Senator Northam (D-6th) did not fall to that temptation. And unlike others, who rue their 2009 strategies, he can walk away from this race, either way it goes, certain he has not violated his own personal standards and that he has run the best race possible.

"I am a huge Ralph Northam fan. I worked with Ralph when he ran and won his Senate race on 07. It was just an absolutely magnificent race. I think Ralph is one of the great public servants in Virginia." - Governor Tim Kaine

Anyone involved in the Senator's 2007 race, where he unseated a Republican incumbent, knows that his staff then, managed by Jon Blair, was as professional as they come. Jon went on to head up the successful 2008 race for New Mexico Congressional candidate Martin Heimrich. That same atmosphere is evident at his current campaign headquarters on Granby Street in Norfolk. On a recent visit, the phone rang and a volunteer answered, then asked, "Is there anyone here who can talk to a man about menhaden?" And every campaign staff member raised their hand. It isn't often that they have to reach for Northam's legislative assistant, Matt Strickler. All of them know the district and the issues far better than Northam's opponent. Ralph surrounds himself with class and competence.