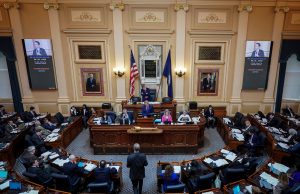 Josh Stanfield - November 8, 2019 7
By Josh Stanfield of Activate Virginia As the post-celebratory fog clears and Democrats emerge energized and ready to rule, we should ask ourselves: will Tuesday’s...

lowkell - March 8, 2019 3
I think it's *very* telling who voted for this badly-needed reform package (Democrats like Rep. Abigail Spanberger - see press release and video, below)...

Is Reform of DPVA Possible—- & What Reforms?

On this blog there have been some interesting articles on what the grassroots want to see changed in the Democratic Party of Virginia (see Let's Improve DPVA - Tech Edition and A Few Suggestions for Reforming DPVA Tech Edition). The long thread of comments provides proof that there is a strong, deep current of dissatisfaction, which is not, be it noted, simply whining, since it includes several well-thought-out recommendations.

This is not the first time on Blue Virginia that we've seen such calls for reform and even lists of suggestions (see the recently re-published Executive Summary of Hard Lessons).  There is, in other words, a body of literature already out there that never got much beyond the readership of this blog, which naturally raises the question: is this time going to be any different?  The Petition on Change.org has sparked interest from some members of the Steering Committee and others, so that's a hopeful sign, and I do remember that about 50 years ago the national Democratic Party did re-organize itself in response to massive complaints, so it really is possible DPVA can reform itself. After all, DPVA's increasing ineffectiveness at winning elections, and the way Organizing for America and even some candidates simply bypass the Party and run their own campaigns, must give even the most die-hard and barnacle-encrusted members of the Old Guard food for thought.

Just nibbling around the edges in order to stave off a serious shake-up is not going to be acceptable to the hard-working grassroots. Therefore, what reforms and changes are on the "A" List, which I believe we have to have, and no dawdling, please?