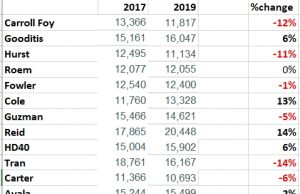 Graphics: How Did the Virginia House of Delegates Candidates Do in...

lowkell - November 11, 2019 0
How did vote totals change in key Virginia House of Delegates districts between 2017 and 2019? Obviously, this is not an "apples-to-apples" comparison, as... 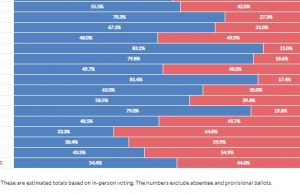 lowkell - November 8, 2018 11
Check out the following graphics, courtesy of VPAP, which show that Tim Kaine won a whopping 26/40 Virginia State Senate districts on Tuesday and...

Kellen Squire - April 26, 2018 2
While nurses account for one out of every forty voters in the United States, they are often nowhere to be found in the corridors...

FreeDem - January 3, 2014 1
Welcome to this twelve part series looking at the challenges, obstacles, and future possibilities of Virginia Democrats. If you've missed past diaries, follow these links: Day One, Competitive Districts. Day Two, Turnout Problems. Day Three, Past Mistakes. Day Four, Downstate Democrats. Day Five, Unchallenged Incumbents. Day Six, Present Opportunities. Day Seven, Democratic Trends. Day Eight, Swing Voters. Thank you for reading. No poll this time, but I do have a question at the end I want comments on!

A phantom of darkness suddenly appears, gliding ominously over the ground toward you. Shrouded in the blackest cloak, its head and face are entirely concealed. One skeletal hand stretches out toward your, a boney finger directed behind you. From beneath the hood, you can feel the gaze of two ghostly eyes directing you to turn around. Doing so, you feel transported ...