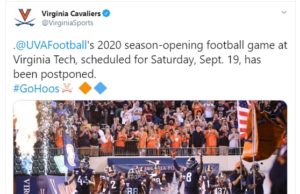 Blue Virginia - September 12, 2020 0
See below for some interesting news this morning from Virginia Tech. Seems like a smart move, although really, given the COVID-19 pandemic (and articles... 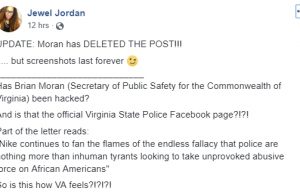 lowkell - September 7, 2018 0
I heard about this story a few hours ago, but I was at an event this evening and couldn't post about it until now....

lowkell - July 29, 2017 7
I've been reading a bunch of articles recently about the relationship between contact sports like football and CTE — "the degenerative brain disease that causes...

Gov. McAuliffe: Just Tell Dan Snyder Where to Shove It (His...

lowkell - August 6, 2016 2
Yesterday, we read that the Virginia governor says state is ‘in very serious negotiations’ for a Redskins stadium: “I view this as a Virginia team,”...

lowkell - May 19, 2016 4
Unlike ideologues (e.g., climate science "deniers") immune to empirical evidence, I've always considered myself first and foremost someone who looks at (and respects) data,...

Knowing What It’s Doing To Players, Can You Keep Enjoying Football? Two of my favorite players to watch when I was a kid, Junior Seau & Dave Duerson, have now shot themselves in the chest to preserve their brains for study. I'm sad they're gone, but have great respect for their willingness to suffer one last time to in hopes of protecting future players from having their brains similarly destroyed by a life of football.

The more we learn about how football damages players' brains, the more troubling it is for me as a fan. Researchers say it's not a handful of rare hits - the ones the NFL tries to limit with penalties & punishments - that cause chronic traumatic encephalopathy. It's the accumulation of constant mid-level impacts - the every-snap crash of offensive & defensive linemen, a linebacker making a crunching tackle on a running back. Progressive columnist Charlie Pierce made a compelling case on ESPN's Grantland just last week in the wake of former NFL player Ray Easterling's suicide:

We ought not to allow people to be destroyed - either all at once, or one concussion at a time - for our amusement. Doing so makes us amoral. Hell, it makes us vampires. We ought to demand that the people who run our sports take better care of the lives and health of our fellow citizens that those industries employ. [...]

There will be people who maintain that NFL players signed on to be cogs in a machine when they signed their initial contracts. There is a libertarian argument that will be made about allowing people to take their own risks with their own bodies. There will be some boohooing about the involvement of "politics" in our entertainment. Standing against these concerns is the simple fact that we all owe each other a debt as members of a political and social commonwealth not to profit from the pain and suffering of each other, no matter who inflicts it or how accidental or deliberate that might be. It is time to regard our individual complicity in the circumstances that we allow to produce what happened to someone like Ray Easterling with a far more jaundiced eye than we ever have. You can enjoy football if you wish. I do. But I can't enjoy it blindly any more. I can't enjoy it with a clear conscience.

Some of the blows to the head can be coached away with proper tackling technique. But I haven't heard anyone say the head blows can be eliminated entirely - and with even college players dying with CTE, clearly the effects can arrive early & overwhelmingly. I'm not saying this is an issue that should be legislated - but considering how ready the Virginia General Assembly stands to regulate other aspects of our lives, how can they justify turning a blind eye to Virginia football players like William & Mary alumni Lou Creekmur dying with CTE?

Can you keep watching football? Will you let your kids play organized football? What about pro wrestling, where the late Chris Benoit & Andrew "Test" Martin were both found to have CTE? Or hockey fights, where "enforcers" Derek Boogaard, Rick Rypien & Wade Belak died in the wake of diagnosed or suspected CTE?