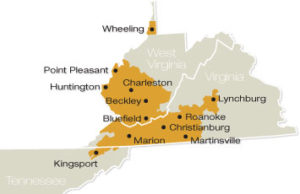 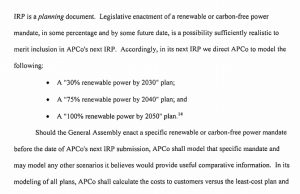 lowkell - January 30, 2020 0
In a sign of how "the times they are a changin'" in Virginia, check out this order from the Virginia State Corporation Commission (SCC)...

Appalachian Power Gets Approval to Sell 100 Percent Renewable Energy to...

lowkell - May 12, 2016 1
by Ivy Main, cross-posted from Power for the People VA Appalachian Power Company has asked the State Corporation Commission to approve a 100% renewable energy...

Dominion gets what it wants, but Virginia doesn’t get what it...

--With apologies to the Rolling Stones

I guess there's a reason I never made it as a songwriter. That last line is a disaster. But that, in a nutshell, is what happened to SB 1349, known as the rate-freeze bill, the ratepayer rip-off, or the Dominion bill, depending on whether you were pro, con, or still trying to figure it out.

The bill began and ended as a way for Dominion Virginia Power to shield excess profits from the possibility of regulators ordering refunds to customers. Along the way, Appalachian Power jumped on board, even though its president had already admitted the company had been earning more than it should.

When we last looked, SB 1349 was undergoing radical rewriting on the floor of the Senate, in real time. Conflicting amendments were being passed around. Outside the chamber, lawmakers from both parties were huddled in hallways with Dominion lobbyists. The coal caucus had already tacked on language making it harder to close coal-fired power plants. Now the Governor, progressive leaders and clean energy supporters were pushing amendments guaranteeing more solar and energy efficiency programs.

To get a sense of how impossible it was for the rank and file to follow, check out the bill history with its amendments offered and rejected, and the readings of the amendments waived.

With cameras rolling and the clock ticking, senators made speeches about provisions other people told them were now in the bill, but without anyone having the time to read the language they were expected to vote on.  That being normal, they voted on the strength of promises made and assurances given.

Our old friends at Dominion VA Power, Appalachian Power, and Virginia's friendly power cooperatives were up to their old obstructionist antics again when one lobbyist from each of the three hulking dinosaurs effectively killed HB 129 (Electric Utilities; purchases from net metering sellers) until next session of the General Assembly. The main bone of contention/opposition on the part of Virginia's Goliath power distributors was the "deregulatory" nature of HB 129. Playing to the Senate Labor and Commerce committee's deepest fears, Dominion VA Power's veteran lobbyist opined that HB 129 would have opened another Pandora's Box of regulatory versus deregulatory struggles inside Virginia. Needless to say, had this primary argument not been made against allowing end users to use solar energy from energy suppliers not named Dominion VA Power, Appalachian Power, or one of Virginia's power cooperatives, some other clever argument would have been made to derail the effort.

The fact that Del. Terry Kilgore (R-Gate City), a Republican, introduced HB 129 in the House of Delegates  shows how overwhelmingly commonsensical Virginia's need for more solar power in general is. Even Senator Frank Wagner spoke up during the Labor and Commerce hearing on HB 129 to urge Virginia to finally move faster and more substantively towards solar power. You even heard the phrase "in the public interest" (Sen. John Edwards) when talking about HB 129 and the need for more renewable power in Virginia. Wow!

Last month, I asked "Is there anything State Sen. Robert Hurt (R-Chatham) won't do for his donors at [American Electric Power subsidiary] Appalachian Power?" Today, we're learning more about what's in it for Hurt as he tries to win the GOP nomination to challenge Rep. Tom Perriello (D-5th).

Hurt's shilling came into the spotlight as he made outlandish excuses to defend Appalachian Power's massive rate hike in December. When 5th district voters expressed outrage at the huge price spike in the middle of a recession, Hurt claimed Appalachian Power had no choice but to raise rates because of carbon pollution regulations. Just one problem -- those regulations don't actually exist yet. (Will Hurt next blame AEP's recent minor stock slip on financial reform that has not yet passed?) Hurt has also vigorously rejected mainstream climate science, sounding an awful lot like Tea Party favorite Ken Cuccinelli.

Hurt's first quarter fundraising report shows his efforts  paid off handsomely, with AEP delivering a $1,000 donation. That's on top of the $3,250 Appalachian Power has contributed to Hurt's campaigns since 2001, just a fraction of the $64,717 Hurt has received from energy companies over that period, including $20,750 from electric utilities.

And if Hurt plays his cards right, there's a lot more where that came from! Don't believe me? Just ask Virgil Goode!