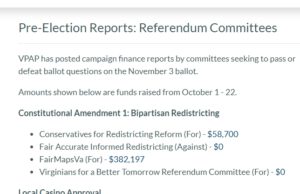 lowkell - October 27, 2020 0
See below for the latest campaign finance #s, courtesy of VPAP, for the Richmond mayoral race, the Virginia Beach mayoral race,  and for referendum...

lowkell - September 16, 2020 0
Campaign finance reports for local candidates for July 1-August 31 are now available from VPAP. Here are some highlights from the two biggest races... 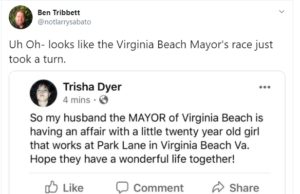 lowkell - June 20, 2020 9
As if there weren't already a million reasons to elect Democrat Jody Wagner as the new Mayor of Virginia Beach, see below for the... 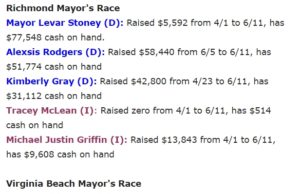 lowkell - June 16, 2020 1
Courtesy of VPAP, here are some highlights from the "campaign finance reports that were due at midnight on June 15, 2020." Richmond Mayor's Race Mayor Levar... 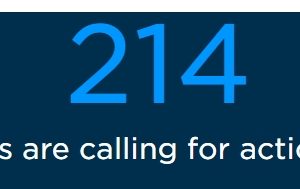 214 Mayors (Including Those From Richmond, Alexandria and Newport News —...

lowkell - August 8, 2019 0
In the aftermath of the mass shootings in El Paso, Dayton - and before that Virginia Beach, Pittsburgh, Parkland, Annapolis, Las Vegas, Sutherland Springs,...

Pat Mullins fired Dave Bartholomew for forwarding a racially charged joke. I wrote about it and, later, Dave complained to me: "You know I'm not a racist." After current chairman Kenny Longo's Obama vitriolic yesterday using resurrected political slander, none should have a question about the membership's intellectual malaise.

At the end of the Republican breakfast, Longo paraphrased an E-mail he said he'd received from three or four sources: President Obama called wounded combat veterans a bunch of whiners who had volunteered to serve and were selfish to expect treatment and rehabilitation.

Jokes, the milieu of Bill Maher and, unfortunately, Dave Bartholomew are distinct and different from slander woven from the whole cloth of prejudice and purpose, then employed by the likes of Rush Limbaugh and his disciples. A joke preys on our fears and prejudice; slander relies on the intent of the purveyor and the utter ignorance of his audience. Humor and slander are very different vehicles for addressing our demons. One challenges while the other feeds our intolerance.

Present were many of the usual suspects: former U.S. Representative Thelma Drake, Republican Second District Chairman Bruce Meyer, Senatorial candidate Bishop E. W. Jackson, members of the Virginia Beach School Board, and City Councilman Bobby Dyer. There was only one strong objection to Longo's remarks, but not from among these paragons of the party.