lowkell - July 20, 2018 7
If you've been following 2018 Virginia Republican U.S. Senate nominee Corey Stewart's career at all, you know at least three main things about him:... 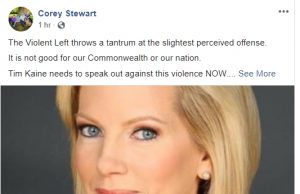 Audio: Gov. Northam Blatantly, Flagrantly, Demonstrably LIES – Not Once But... Paul Ryan's acceptance speech at the GOP convention was so brazenly and comprehensively dishonest that even a national media corps that is typically loath to personally call out politicians on either side for their mendacity felt compelled to address the matter, if only to maintain the tiny shred of credibility they still have with the American public.

Needless to say, that brought out an immediate and full-frontal assault on the media from the typical corners of the Wingnut movement, primarily based on the now debunked and shopworn charges of liberal media bias. Heck, this time even Faux News called out Ryan on the speech.

But Ryan and his Wingnut defenders also argued (sometimes with merit, sometimes without, in my view) that everything in Ryan's speech was technically true. They cited Ryan's story about the closing of the Janesville GM plant as an example. Ryan never actually asserted, they point out, that the plant closed while Obama was president (which is true). Rather, they say, Ryan recited a set of technically accurate, albeit incomplete facts, to advance their argument that Obama's presidency is one of unfulfilled promises, and, well, if they created the false impression that the plant closed under Obama, that was incidental and unintentional.

That's right. Ryan's defense is I may deceive you, but I don't lie!

But then there is this, even more pathetic news that emerged yesterday.