My Dad’s a Fox News-Watching Texan. What He Said About Pete... 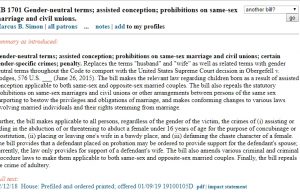 lowkell - December 13, 2018 2
Since my last update on November 27, there have been a bunch of bills "pre-filed" for the 2019 Virginia General Assembly session that starts...

Poll: Who’s Your Current Choice for the Dems’ 2020 Presidential Nominee?

Video: Terry McAuliffe Says Democratic Politicians “Should NOT Be Talking About...

lowkell - August 12, 2018 5
A few things jumped out at me from this interview: 1) Terry McAuliffe said that with Trump in the White House, white supremacists and...

FreeDem - December 14, 2014 2
A little over a year ago, I started a series of diaries looking at the past, present, and future of Virginia politics. You can check out the entries here: Day One, Competitive Districts. Day Two, Turnout Problems. Day Three, Past Mistakes. Day Four, Downstate Democrats. Day Five, Unchallenged Incumbents. Day Six, Present Opportunities. Day Seven, Democratic Trends. Day Eight, Swing Voters. Day Nine, 2021 Redistricting. Day Ten, Independent Redistricting. Day Eleven, A Diverse Future. And finally Day Twelve, Messaging This year, I wondered if there was enough new information to justify a complete update to the series. But Mark Warner's near defeat in 2014, and the analysis about the race that followed, showed the trendlines of a year ago are stronger than ever. Instead, I spent this weekend looking at various population trends and projections in Virginia, with an eye to the next round of redistricting.

In the fall of 2012, UVA's Weldon Cooper Center for Public Service issued its population projections for 2020 and beyond. They forecast a slowdown in population growth overall for the Commonwealth, with Southside and Southwest Virginia barely growing at all.

But their projections came with a grain of salt.

It’s Never Over in Virginia

The dust has settled over the Commonwealth after election day 2014, and Mark Warner will survive to serve out another six years in the Senate ... assuming he stays that long. But there's no end to campaigns in Virginia, which because of our odd-year election cycle hosts heated elections every calendar year. For instance, with newly elected Congresswoman Barbara Comstock, there will soon be a special election for the 34th House of Delegates district. Other special elections will be held in the 4th district (Southwest Virginia, to replace newly elected State Senator Ben Chafin) and the 63rd district (Petersburg, to replace newly elected State Senator Rosalyn Dance) -- but don't expect any surprises there. Here's a preview of what to look forward to in Virginia politics.

34th House of Delegates Special Election
Let's give a brief history of the 34th in the last few election cycles. In 2007, Republican incumbent Vince Callahan retired and the open seat was won in a good Democratic year by Margi Vanderhye. Margi had defeated Rip Sullivan in the Democratic primary (Rip is finally making his way to Richmond from the 48th District). I wonder if Rip's pleased that he didn't end up in the 34th, as in 2009 a Republican tsunami swept out Vanderhye by 422 votes.

FreeDem - January 3, 2014 1
Welcome to this twelve part series looking at the challenges, obstacles, and future possibilities of Virginia Democrats. If you've missed past diaries, follow these links: Day One, Competitive Districts. Day Two, Turnout Problems. Day Three, Past Mistakes. Day Four, Downstate Democrats. Day Five, Unchallenged Incumbents. Day Six, Present Opportunities. Day Seven, Democratic Trends. Day Eight, Swing Voters. Thank you for reading. No poll this time, but I do have a question at the end I want comments on!

A phantom of darkness suddenly appears, gliding ominously over the ground toward you. Shrouded in the blackest cloak, its head and face are entirely concealed. One skeletal hand stretches out toward your, a boney finger directed behind you. From beneath the hood, you can feel the gaze of two ghostly eyes directing you to turn around. Doing so, you feel transported ...