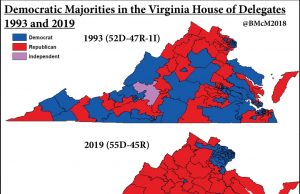 lowkell - November 12, 2019 1
It's really fascinating to see how Virginia's political geography has changed over time.  To see this visually, check out the following maps (by Barry,...

If Richmond’s Mayor Cared About Schools

The stadium deal is a useful distraction. While the school system crumbles, Dwight Jones mumbles. The return on investment of his professional football venture is a closely guarded disappointment. Now he ties baseball to slavery. Where was he when Curt Flood made the only reasoned connection? It is shameful self-promotion.

When the Richmond Times Dispatch held one of its public square forums about the stadium proposal, Mayor Jones slid into the back of the room and refused the opportunity to explain why Richmond should invest millions in circus events in another scheme that will rob the deficient school system of funds sorely needed for not only current operations and maintenance funding but also investment in deteriorating infrastructure. It isn't just schools, but they are most important. On this, the Mayor is mute.

"They paved paradise and put up a parking lot..." - from Joni Mitchell's Big Yellow Taxi

Jones's argument that the Shockoe Bottom stadium is somehow tied to the funding for the preservation of what should be hallowed ground is oxymoronic. The ground was long ago violated when I-95 plowed through; enough. And now the Mayor wants to break ground without a care about the potential sanctity of the very location he's ready to plow under. Somehow he's argued privately that is only the concern of those who oppose the slavery museum. And Jones is desperately looking for evidence that supports his "vision."