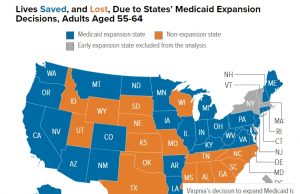 New Study: Virginia Democrats’ Medicaid Expansion Will Save 900 Lives in...

lowkell - November 16, 2019 0
As we all know, Virginia Democrats pushed hard for Medicaid expansion under the Affordable Care Act for years, while the vast majority of Virginia... 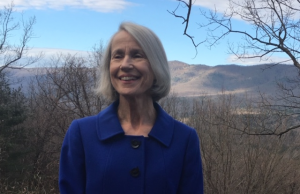 Who Is Mark Obenshain Serving– When It Comes to the Destabilization...

“Who Is Mark Obenshain Serving?” — Calling Him Out on His...

April Moore - April 16, 2019 1
I’d like to share with you a major part of my approach in my campaign challenging Mark Obenshain for the SD-26 seat in the...

April Moore - January 31, 2019 1
Here is the text of the speech I gave on Tuesday, at a press conference in Harrisonburg, to launch my campaign against Mark Obenshain... 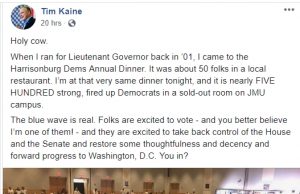 Tim Kaine’s Superb Speech Illuminates Why All Americans Should Want a...

lowkell - May 30, 2018 9
It's looking increasingly likely - although of course nothing's over 'til it's over, don't count your chickens before they hatch, etc. - that Virginia...

lowkell - February 22, 2018 3
So much for the Virginia House of Delegates being the hyper-partisan, far-right chamber while the Virginia State Senate is supposedly the body of more...

Blue Virginia - September 25, 2017 3
By Larry Barnett, candidate for Virginia House of Delegates, HD-27 If you understand why it’s important to get your oil changed every 6,000 miles, you’ll...

Medicaid expansion will help 3,100 residents in the 50th district

Lee Carter - April 4, 2017 0
Tomorrow, the Virginia General Assembly will reconvene in Richmond for a session to determine the fate of bills that have either been vetoed or...

They certainly have done nothing to deliver health care to rural Virginia. Cadet Hoang collapsed during training on Monday, treated at the scene, transported to the school's infirmary, then transferred to the local Carillion Stonewall Jackson Hospital. The question begged: what if millions had been invested in local healthcare infrastructure?

Tragedies like this occur. It is not that the young cadet collapsed during training from what well may have been a congenital condition; it is that the standard of care available in rural Virginia is subpar. At least Lexington has a hospital of sorts. Much of rural Virginia has no immediate facility. There is demand; it is just not operationalized in the marketplace. But this situation draws attention to the fact that even those who have health insurance suffer from the failure to expand Medicaid. You can have the best insurance in the world but if there is no facility in reach, it does not matter. What would have been different if $2.5 billion dollars had provided the incentive to expand service across the state?

Every step in the decision making process during crisis is guided by the conditions extant. What would the response during Hoang's emergency have been if those responding weren't faced with the fact that the closest urgent care facility wasn't an hour away from Lexington in Waynesboro and that the goal for being seen by a physician after triage at the local hospital emergency room in Lexington was something more impressive than 40 minutes; yes, that is from the hospital's website. The young man might have been taken directly to a facility actually staffed and equipped for immediate emergency intervention rather than to the school infirmary.

We will never know. What we do know is that the options for everyone living in Lexington and the rest of rural Virginia would be different and significantly better with the infusion of millions of those billions of dollars locally. But Republicans are dead set against allowing the marketplace to function. And Lexington is far from being as isolated as many localities. Thousands of Virginians are suffering and dying unnecessarily as a direct result of Republican intransigence.