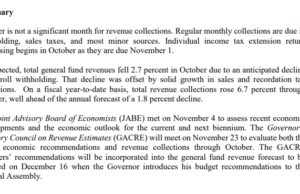 October 2020 Revenue Report: “Virginia is on sound financial footing despite... 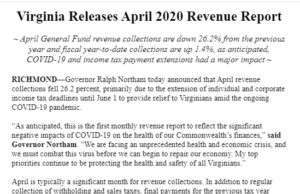 The news that there will be a budget shortfall should be no surprise. It was predictable and may be the real reason Republicans are pitching such a hissy over Medicaid: they need a smokescreen for their complicity in the McDonnell subterfuge. But it may be worse than at first blush.

Just a couple of weeks ago, the Wall Street Journal provided pessimistic reports regarding state and local government projected revenues from personal income taxes. This was followed by a column by Richard Ravitch that outlined an indictment of fiscal malfeasance across the country. Almost every example he provided should send a chill down our spines. It was as though he was focused on the McDonnell years in our state but there are cases in our local jurisdictions where you find the trail toward insolvency too. Unfortunately, Democrats are not squeaky clean.

Sounding the alarm, Ravitch asks aloud whether the current woes are cyclical or structural. Are they tied to the financial collapse of 2008 or are they the result of legislation that fails to safeguard sound fiscal practice?

Ravitch outlines the common practice of making contributions to employee pension funds that are insufficient to meet contractual and/or constitutional guarantees..."sometimes contributions are not made at all for years at a time." Everyone involved has an incentive to keep contributions low because the alternative is risk underfunding or face layoffs and/or benefit reductions.

The first and most apparent manifestation of trouble in Virginia is in the Virginia Retirement System. McDonnell and his comrades crafted a complicated fraud on Virginians and our employees. He even claimed that he had resolved the issue of unfunded obligations. That is a lie that will return to haunt.

"Some payments to pension funds are made with promissory notes rather than cash...borrowing to cover operating deficits." - Ravitch

If state employees had adequate representation, by that meaning a union, the issue might had been adequately addressed. Instead, McDonnell was able to write a ten year mortgage that will never be adequately repaid while continuing to pile up unfunded obligations for the system. Yes, eventually there was another lie perpetrated concerning employee contributions that established a basis for claiming resolution; this single malfeasance may be enough to eventually bankrupt the state, but it pales in comparison with inadequately funding Medicaid which is the largest obligation in almost every state.