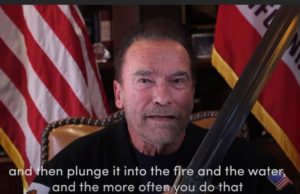 lowkell - January 11, 2021 0
by Lowell Here are a few national and Virginia news headlines, political and otherwise, for Monday, January 11. Two-Mile Nosedive by a Boeing 737 in...

lowkell - May 19, 2019 2
by Lowell Here are a few national and Virginia news headlines, political and otherwise, for Sunday, May 19. Trump, China and trade: Who blinks first? ...

What a concept, a "reality-based" Republican, someone whose mind can actually be changed by powerful new evidence. In this case, Schwarzenegger says:

All of you have seen, when you turn on the television, the devastation in the Gulf, and I'm sure that they also were assured that it was safe to drill. I see on TV the birds drenched in oil, the fishermen out of work, the massive oil spill and oil slick destroying our precious ecosystem. That will not happen here in California, and this is why I am withdrawing my support for the T-Ridge project.

In stark contrast, our own governor, ideologue and oil industry tool Bob McDonnell, "continues to lobby aggressively to drill for oil and natural gas without delay."  The contrast between Ah-nuld and Pat Robertson's Manchurian Candidate could not be greater, and it really says it all about Bob McDonnell.

P.S. Add Florida Governor Charlie Crist to the list of sane Republicans, as he "declared the issue of drilling off the Florida coast effectively dead Monday as he monitored the latest news surrounding an oil spill caused by an explosion on a BP rig last month."

UPDATE: See the DPVA's statement, "Governor McDonnell: Drilling at any cost," after the "flip."