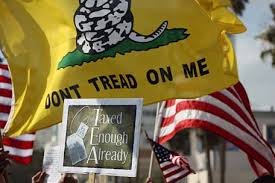 The Tea Party movement, working within the Republican Party, has momentum after rubbing out Senator Bennett's career in Utah and forcing Charlie Crist in Florida to call himself an Independent. Whether the Tea Party participants realize it or not, their mission has mutated from an amorphous anger against the modern world of diversity and what they refer to as "big government and too many taxes," into a flat-out commitment to the catechism of corporate feudalism, which masquerades right now as a movement to restore the capitalist free market of a (mythical) 18th century political past, as they believe it was created by our Founding Fathers in an infallible document venerated as The Constitution.

The entire scenario admits of no questions and no deviation---- it is like a secular religion, despite being a confusing mishmash of various wish lists from groups on the extreme right. The one over-riding message buried in that mishmash is the intent to dismantle the government, while pretending to save it----- rather like the military commander who lamented, "In order to save the village, it was necessary to destroy it."

The Tea Party's primary aims are actually a distillation of long-cherished Republican fetishes, like distaste for government, that date back even to pre-Reagan days, including a bed-rock conviction regarding all taxes as an immoral taking from the prudent and hard-working by the lazy and improvident through the power of what they see as a fundamentally illegal government (which can do nothing right anyway: "I'm from the government and I'm here to help you. Hahaha"). The Tea Party, therefore, is Republicanism on steroids. They are political luddites, one and all.